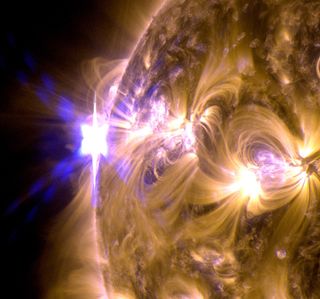 The sun erupted with an X1.7-class solar flare on May 12, 2013. This photo blends two images of the flare from NASA's Solar Dynamics Observatory.
(Image: © NASA/SDO/AIA)

A huge solar flare erupted from the surface of the sun late Sunday (May 12), followed by an even more powerful blast less than 24 hours later. The solar eruptions are the most powerful ones seen so far this year.

The first flare registered as an X1.7-class sun eruption, and peaked at 10:17 p.m. EDT (0217 GMT) on Sunday night, according to SPACE.com. X-class flares are the most powerful type of solar storm, with M-class eruptions falling within the midrange, and C-class flares being the weakest.

Less than 24 hours later, the sun fired off an X2.8-class flare that peaked at 12:05 p.m. EDT (1605 GMT) on Monday (May 13). This second flare is currently the strongest solar eruption of 2013, NASA officials said. Both sun storms were seen by NASA's Solar Dynamics Observatory, which orbits the Earth while monitoring the sun for space weather events. [Most Powerful Solar Storms of 2013 (Photos)]

Sunday's flare unleashed a wave of plasma and charged particles, called a coronal mass ejection (CME), into space. While the CME was not directed at Earth, the weekend flare triggered an hourlong high-frequency radio blackout, according to the Space Weather Prediction Center, which is managed by the National Oceanic and Atmospheric Administration.

When they are aimed directly at Earth, X-class solar flares can interfere with satellites in orbit and communications infrastructure on the ground. Powerful sun storms can also be hazardous to astronauts living aboard the International Space Station.

On Earth, solar eruptions can cause radiation storms that intensify normal aurora displays (also called the northern and southern lights) for skywatchers at high latitudes.

Solar activity ebbs and flows on an 11-year cycle. The sun is currently in an active phase of Solar Cycle 24, which began in 2008 and is expected to peak later this year.