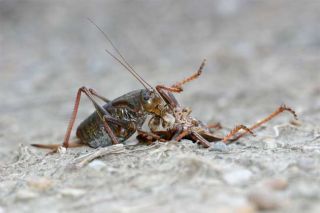 The ancient Chinese knew what scientists have just rediscovered: Crickets with large heads are better fighters.

The Chinese needed to know: They have bet on cricket fights since Sung Dynasty (A.D. 960-1278). This ancient practice has resulted in a detailed list of characteristics that Chinese practitioners think make for champion fighters, including mention of big heads in an 800-year-old text.

"Because money was involved, there was a strong incentive for the practitioners of this sport to observe their cricket fighters closely," says Kevin Judge, a biology postdoctoral researcher at University of Toronto Mississauga.

In nature, male field crickets fight one another over territories and access to potential mates by using their pointed and pincer-like mouthparts as weapons. In a study published in the Dec. 24 issue of the online journal PLoS ONE, Judge and co-author Vanessa Bonanno show that, indeed, males with larger heads and mouthparts are more successful in fights with smaller-headed rivals.

They also show that male field crickets have larger heads and mouthparts than females, which, "makes sense given that female crickets don't fight over mates," says Judge.

Field crickets, a diverse group of insects distributed around the globe, have been important subjects for researchers interested in studying the evolution of animal aggression and the settlement of contests between individuals. For all that study, the influence of heads and mouthparts as weaponry has been largely overlooked in field crickets, unlike their close allies, the New Zealand weta, says Judge.

The study by Judge and Bonanno, "tested theories of contest settlement and sexual selection, and how body shape has evolved to help males in competition with other males," says Judge.

The researchers conducted two experiments to test the hypothesis that relatively larger weaponry conveys an advantage to males in aggressive contests. Pairs of males were selected for differences in head size and consequently were different in the size of maxillae and mandibles. In the first experiment, males were closely matched for body size (pronotum length), and in the second, they were matched for body mass. Males with proportionately larger weaponry won more fights and increasing differences in weaponry size between males increased the fighting success of the male with the larger weaponry.