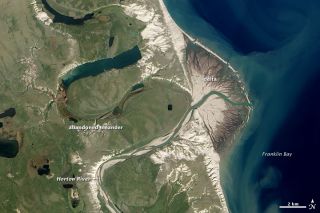 Canada's Horton River ends in a sprawling delta along the coast of a bay, but it once had a more meandering course, as seen in abandoned channels in this image taken by NASA's Earth Observatory-1 satellite on July 31, 2012.
(Image: © NASA)

Hints of the sinuous meanderings of one river over the centuries can be seen in a newly released NASA photo taken by the agency's Earth Observing-1 satellite on July 31.

While rivers on a steep slope follow a mostly straight path under gravity's pull, rivers on flat land often meander, flowing to the left or right and creating undulating curves. The exact path the river follows over time can change, and some meander become "abandoned" as the river follows a new route.

Today, the Horton River, situated in northwestern Canada about 260 miles (420 kilometers) east of the Alaska border, empties into Franklin Bay where its delta is a fan-shaped interruption to the otherwise straight coastline.

But the river once continued another 60 miles (100 kilometers) or so northward, draining into Harrowby Bay. The older routes that the river once took can be seen in abandoned meanders in the satellite image, which are now filled by lakes.

The river changed course when it broke through a barrier that sent its water tumbling down a steeper path to the coast.

In investigating when exactly the river took its shortcut to the sea, researchers of a 1989 study used three lines of evidence: historical records, tree ring dates and rock and sediment layers, according to a NASA release.

An expedition that mapped the mouth of the river between 1825 and 1827 showed that the river was in its current position at that time.

The river flows through treeless tundra near its mouth, but there are spruce trees further upstream. When wood falls into the river, it can become deposited on the banks of the river channels. The researchers dated wood from the abandoned channels that showed that the most recent wood from them was deposited before 1640, so the change must have happened after that time.

By looking at the rate of delta growth since the area was first mapped, and assuming it was constant, and factoring in rock and sediment ages, the researchers concluded that the river changed course around 1750.