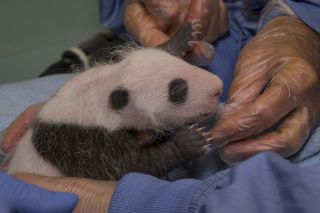 The quick, 3-minute exam allowed staff just enough time to determine that the cub is healthy, thriving and weighs 1.5 pounds (0.7 kilograms). Vets were able to listen to the cub's heart and lungs, both of which sounded good, but were not able to determine its sex.

The tiny paws of the cub seen in the above photo will grow into one of the most interesting paws in the animal kingdom. Giant pandas have a pseudo thumb, which enhances their ability to gather and eat bamboo. No other species of bear has this distinctive trait.