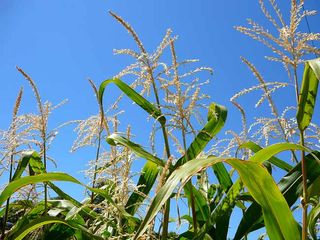 Editor's Note: "The Energy Debates" is a LiveScience series about the pros, cons, policy debates, myths and facts related to various alternative energy ideas. We invite you to join the debate by commenting directly on each article. The Facts Instead of relying on just gasoline, many cars are now also burning ethanol, more commonly known as drinking alcohol. Although ethanol has just roughly two-thirds as much energy as gasoline, it already is finding increasing use in the gas tank. In 2007, ethanol displaced roughly 3 percent of U.S. gasoline usage, according to the Union of Concerned Scientists, a science advocacy group. Ethanol is typically made from corn, sugar cane and other crops. However, scientists are working on generating the fuel by converting hundreds of millions of tons of cellulose in prairie grass and leftovers from harvests and lumber yards that would otherwise go to waste. Six biorefineries originally scheduled for completion by 2011 sought to create such "cellulosic ethanol" to help the United States produce more than 130 million gallons of the fuel per year at roughly $1.20 a gallon. However, just one of these is currently under construction. Critics of ethanol are often accused of shilling for the oil industry. On the other hand, supporters of ethanol are often charged with backing the increasingly powerful ethanol lobby. Pros Since ethanol is made from plants, this means it is made renewably, unlike fossil fuels. In addition, because plants naturally soak up the greenhouse gas carbon dioxide, in principle, using ethanol could in total release little or no carbon dioxide into the atmosphere, or even help remove it. Cons A number of studies hotly debate whether ethanol guzzles more energy during its manufacture than it provides. Researchers have also suggested that ethanol may not cut down on carbon dioxide emissions as much as hoped, since creating ethanol generates a lot of the greenhouse gas in the first place. In addition, it remains controversial as to whether making ethanol strains valuable water resources. "Recent results are showing that any benefits from using food to make fuel may be illusory," said Jeremy Martin, a senior scientist at the Union of Concerned Scientists' clean vehicles program. Cellulosic ethanol may be an improvement over ethanol made from crops, "but we won't know until the plants get built." Moreover, fuels high in ethanol may pose an equal or greater risk to public health than regular gasoline. The number of deaths and hospitalizations linked with respiratory ailments might rise if every vehicle in the United States used the latest automotive technology to run on fuel containing high levels of ethanol, according to a 2007 study from Stanford University. What do you think?