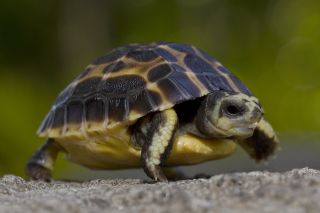 A Madagascar spider tortoise has successfully hatched at the San Diego Zoo, the zoo announced this week.

The zoo is home to two males and two females of this species; the sex of the newly hatched tortoise is not yet known.

The zoo has been working with this species since 1998 in hopes of creating a genetically viable and sustainable group . The zoo is also working closely with the Turtle Survival Alliance to support tortoise conservation in Madagascar.   The number of Madagascar spider tortoises, like most animals native to Madagascar, is in drastic decline due to deforestation and the illegal pet trade. This species has been listed as critically endangered by the International Union for the Conservation of Nature since 2008.