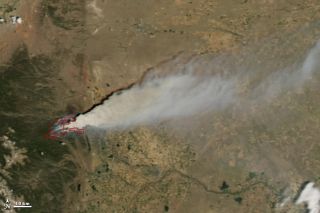 Images of wildfires taken by satellites show they continue to rage in parched Colorado and New Mexico, testing the resources of state and federal crews.

The wildfires currently burning in the West include the Whitewater-Baldy fire in New Mexico, the largest in state history, and the High Park Fire in Colorado, which despite being discovered only four days ago has already become the state's third-largest ever recorded.

The Whitewater-Baldy fire has chewed through 435 square miles (1,127 square kilometers) of forest near Glenwood, N.M., since it was ignited by lightning on May 16, according to the U.S. Forest Service. It was 37 percent contained yesterday (June 11).

Colorado's High Park Fire, centered about 15 miles (24 km) west of Fort Collins, Colo., has already charred 68 square miles (176 square km), according to the Denver Post, and about 600 firefighters will tackle the fire today. It has already caused one death and destroyed at least 118 structures.

At least 18 large wildfires are burning in nine U.S. states, the Associated Press reports. The National Interagency Fire Center said 4,000 of 15,000 federal firefighters are deployed to put fires out around the country.

Wyoming diverted personnel and aircraft from two fires there to help with the Colorado fire, and Canada lent two aerial bombers following the recent crash of a U.S. tanker in Utah. An elite federal firefighting crew also arrived to fight the blaze.

Smoke has affected air quality from Colorado to Wyoming, prompting health warnings. Fires have spread quickly in many areas due to low rainfall and stands of dead trees killed by pine beetles.

Winds have carried haze from the Whitewater-Baldy fire in New Mexico as far north as Santa Fe, as far south as Las Cruces, and west into Arizona, and temporarily forced the closing of the Gila Cliff Dwellings National Monument, according to the Las Cruces Sun-News.