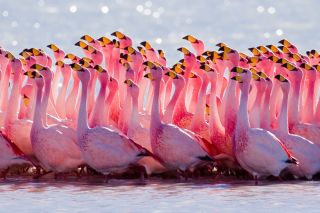 WASHINGTON, D.C. — On a comfortable June evening, an excited crowd milled around a red carpet laid out in front of the Uptown Theater; cameras flashed as the stars of the evening eagerly awaited a turn with the boa constrictor.

A National Geographic Channel premiere is not like other premieres. Instead of expensive perfume, the scent of hand sanitizer filled the air.

The 8-foot, 40-pound (2.4-meter, 18-kilogram) boa constrictor made the rounds as a parade of well-dressed humans posed for photographers, the giant snake placidly draped around their shoulders. Both species were there to celebrate the launch of National Geographic Channel's latest film project — "Untamed Americas," a four-part miniseries more than two years in the making, which debuts on Sunday (June 10).

A dainty alligator was also on hand for pictures, but proved a far less popular partner.  Which is perhaps why it bestowed a small but unwelcome surprise on three good-natured ladies. They wiped it off — and then laughed it off. More hand sanitizer made the rounds.

The trio was in high spirits as they headed into the darkened theater to watch the first installment of the four-hour series, an epic undertaking that sent National Geographic Channel filmmakers to 43 locations in 20 countries for more than 600 days of shooting. [Images from "Untamed Americas"]

Each episode tells the animals' stories through the lens of struggle. Some battle each other; some battle scarcity or brutal living conditions — but all are in a pitched battle to eat, breed and simply survive.

A lone, tattered wolf races across frigid ground, desperate to catch a caribou. A grizzly mother and her cubs rip into a young elk, its blood smearing their snouts. A tiny bat with a tongue longer than its own body (and making its television debut) plunges its head deep into an exotic bloom. A family of young pumas learns that skunks can be an unpleasant target.

The script is deftly written with a spare hand, a style that suits the narrator, actor Josh Brolin, who delivers the films' stories with the restrained air of a cowboy. Along with the score, which features soaring guitar solos that wouldn't be out of place in a pickup truck commercial, the films have a rugged sensibility throughout. It is a distinctly American style, and it works.

The stories veer from violent to adorable, but all unfold against a backdrop of stunning scenery. And although it appears effortless on screen, the filmmakers behind the project spent days on end in some of the harshest environments on Earth to capture the wild, rarely seen moments featured in the series.

Filming flash floods, a once-a-year night of toad sex, elusive dolphins, and an epic fight between a tiny mouse and a venomous centipede — a scene that is not to be missed — were just a few of the adventures producer Andy Mitchell described to OurAmazingPlanet.

A seasoned wildlife filmmaker, Mitchell produced, wrote and shot much of the Coasts and Deserts episodes. The common thread, he said, was intense planning and good fortune. "We were in the right place at the right time, and got insanely lucky," he said.

And, he added, there's another secret to capturing footage of elusive animal behavior: scientists. "You find the people that have spent the last 30 years of their lives researching and working with these things," Mitchell said.

Karen Bass, the series producer and a seemingly tireless woman, said the years-long project brought both challenges and surprises, many of them good ones.

More than anything, Bass said, she hopes the films resonate with the audience, young people in particular. "Hopefully we might get a few people of the next generation hooked in, and understanding what an incredible place our planet is," she said. "It's home, and it's still got so many fantastic things to explore and be discovered."

Some of those things might not be as far away as you think, said Casey Anderson, a naturalist and host of his own shows on the Nat Geo WILD Channel, who was attending the premiere to simply help spread the word. ("My involvement, truly, is just to brag for all these people, who are very humble," he told OurAmazingPlanet.)

Anderson said that some nature films make it seem as though the only way to experience the wild, untamed life is through exotic travel, to places like Africa; but for U.S. residents in particular, he said, there's lots of amazing stuff right in our own backyard.

"A lot of the great images in these films were either in national parks, or ecosystems that are directly adjacent to national parks," he said. "When they see this, I think people who live in the Americas will stop buying plane tickets when they want to view wildlife, and just turn the key in their car and head down the road."

Once the film was over and the enthusiastic applause ended, the audience itself headed down the road toward the Smithsonian Institution National Zoo, where a reception awaited. Guests were welcomed to a large, white tent, set aglow with candlelight, where thumping music soon drowned out the clink of wine glasses.

On the short walk to the zoo, past cafes, dry cleaners and frozen yogurt shops, the wild places and brutal struggles that lit up the screen minutes before seemed far away. Then, suddenly, someone stopped short. Carnage was here, too, on Connecticut Avenue! A puddle of red glop and splintered remains marred the sidewalk. A closer look revealed it was simply a shattered jar of spaghetti sauce, the aftermath of some human's nightly battle for dinner.