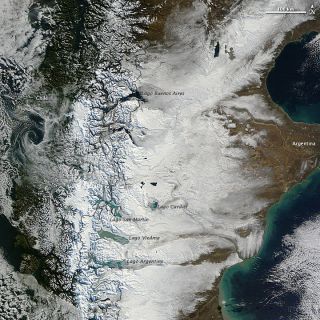 Snow is more common in the Northern Hemisphere than the Southern, but long-term observations have shown that parts of southern Argentina and Chile are likely to see snow in June, according to a NASA statement.

Snow already covered parts of Patagonia when the Moderate Resolution Imaging Spectroradiometer (MODIS) on NASA's Terra satellite snapped this picture on Wednesday (May 30). In the image, the snow extends from the mountains of Chile eastward across the plains of Argentina. The vivid blues of glacial lakes in the region stand out against the stark white snow.