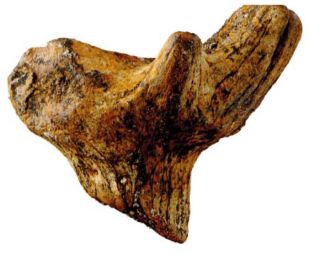 A fossil antler of a prehistoric deer that clued researchers in.
(Image: © © Senckenberg.)

Fossilized antlers, teeth and wood dug up near Europe's storied Rhine River indicate the  waterway is 5 million years older than many scientists had thought, according to new research.

The Rhine originates in the Swiss Alps and flows more than 750 miles (1,200 kilometers) northward; it empties into the North Sea along the Netherlands' coast.

There's been an ongoing debate in the scientific community about just how old the river is, according to Madelaine Böhme, a researcher at the Senckenberg Center for Human Evolution and Paleoecology at the University of Tübingen in Germany.

For that reason, scientists examined more than 300 fossils from one of the oldest known areas of the river basin — an area that is a famed treasure trove of fossils.

Böhme, lead author of a study published in the journal PLoS One on May 16, examined fossils dug up in the 1980s that are housed in museum collections.

"In the process we found the teeth and bones of different deer species that lived in Central Europe at the beginning of the Middle Miocene — in other words, in the period between 14 and 16 million years ago," she said in a statement.

"The results of the examinations of fossil plant residues that were found above and below the mammalian sites reinforce our conclusions," Böhme added.

Previous studies suggested the river was approximately 10 million years old, yet the new research indicates the site is far older, and may prompt scientists to rethink the area's chronology, and what plants and animals lived in the region at different times in the distant past.