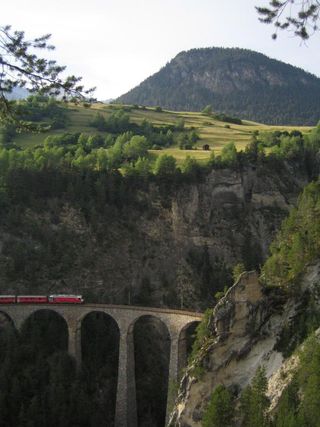 A train crosses a river gorge in the Swiss Alps that drops steeply from the floor of the broad glacial valley above it.
(Image: © Oliver Korup)

The jaw-dropping gorges of the Swiss Alps were created by a one-two punch of grinding glaciers and slicing rivers, a new study suggests.

For years, geologists have argued about the processes that formed steep inner gorges in the broad glacial valleys of the Swiss Alps.

The U-shaped valleys were created by slow-moving glaciers that behaved something like road graders, eroding the bedrock over hundreds or thousands of years. When the glaciers receded, rivers carved V-shaped notches, or inner gorges, into the floors of the glacial valleys. But scientists disagreed about whether those notches were erased by subsequent glaciers and then re-formed as the second round of glaciers receded.

New research detailed today (Dec. 5) in the journal Nature Geoscience suggests that the notches endure, at least in part, from one glacial episode to the next. The glaciers appear to fill the gorges with ice and rock, protecting them from being scoured away as the glaciers move, according to the researchers, from the University of Washington in Seattle. [Related: In Images: Tracking a Retreating Glacier ]

When the glaciers receded, the resulting rivers returned to the gorges and easily cleared out the debris deposited there, said research team member David Montgomery of the University of Washington.

"The alpine inner gorges appear to lay low and endure glacial attack. They are topographic survivors," Montgomery said. "The answer is not so simple that the glaciers always win. The river valleys can hide under the glaciers and when the glaciers melt, the rivers can go back to work."

Topographic data, measurements of the Earth's surface taken from laser-based (LIDAR) measurements, suggested that if the gorges were erased with each glacial episode, the rivers would have had to erode the bedrock from one-third to three-quarters of an inch per year since the last glacial period to get gorges as deep as they are today.

"That is screamingly fast. It's really too fast for the processes," Montgomery said.

Such erosion rates would exceed those in all areas of the world except the most tectonically active regions, the researchers said, and they would have to maintain those rates for 1,000 years.

Montgomery and colleagues found other telltale evidence including sediment from much higher elevations that was older than the last glacial deposits at the bottom of the river gorges. That material likely was pushed into the gorges as glaciers moved down the valleys, indicating the gorges formed before the last glaciers.

"That means the glaciers aren't cutting down the bedrock as fast as the rivers do. If the glaciers were keeping up, each time they'd be able to erase the notch left by the river," Montgomery said. "They're locked in this dance, working together to tear the mountains down."

The work raises questions about how common the preservation of gorges might be in other mountainous regions of the world.

"It shows that inner gorges can persist, and so the question is, 'How typical is that?' I don't think every inner gorge in the world survives multiple glaciations like that, but the Swiss Alps are a classic case. That's where mountain glaciation was first discovered," Montgomery said.