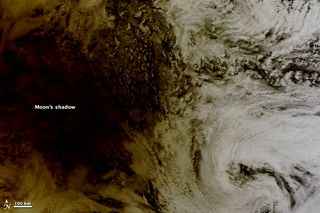 The moon's shadow during the May 20, 2012, annular solar eclipse was spotted racing across the Pacific Ocean by the MODIS instrument on NASA's Terra satellite.
(Image: © NASA)

While thousands of skywatchers were looking up on Sunday (May 20) at the annular lunar eclipse that was visible from Asia to the western United States, NASA's Terra satellite was looking down and took a spectacular image of the moon's shadow over the Pacific Ocean.

Annular eclipses occur when the moon is at a point in its orbit that is too far from Earth to completely block the sun's disk. The result is a ringlike, or annulus, effect.

The event on Sunday blocked sunlight across a swath of Earth up to 185 miles (300 kilometers) wide — a distance particularly appreciable from the vantage point of orbit.

The Moderate Resolution Imaging Spectroradiometer (MODIS) on the Terra satellite spotted the moon's shadow racing across the Earth's surface and snapped a natural-color image of the eclipse shadow on the Pacific Ocean at roughly 11:30 a.m. local time on May 21 (23:30 UTC May 20).

The left half of the image is black and fully under the part of the shadow called the umbra, but around the shadow's margins, called the penumbra, the planet's surface appears a yellowish-brown.

The annular eclipse started in southern China at 22:06 UTC on May 20, then swept over southern Japan, the Pacific Ocean, Alaska's Aleutian Islands, before finishing over Oregon and California around 01:30 UTC on May 21. The eclipse reached its maximum duration of 5 minutes 46 seconds over the Pacific Ocean, according to a NASA statement.

Astronauts aboard the International Space Station also caught a glimpse of the eclipse from above. Down on the ground, thousands watched from U.S. national parks and a pair of veteran astrophotographers went on a photo expedition and took pictures of the eclipse from a spot over a scenic canyon.