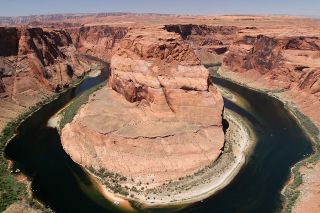 Imelda Joson and Edwin Aguirre, based in Boston, traveled to the Horseshoe Bend Overlook at Page in northern Arizona to view and photograph the annular solar eclipse that was visible across much of the western half of the country yesterday (May 20).

"The sky was perfectly clear in Page throughout the day," Joson and Aguirre wrote in a statement. The pair had analyzed weather statistics across the eclipse's path, as well as the expected duration of the eclipse at different spots to arrive at their final pick for a viewing spot.

At Horseshoe Bend, "the Colorado River makes a spectacular 270-degree turn in the Glen Canyon," Joson and Aguirre wrote. The spot is at an elevation of 4,300 feet (1,300 meters) above sea level.

The spot they picked was less than half a mile from the central line of the eclipse track, where the full eclipse was visible, and more than 600 amateur astronomers and tourists gathered at the spot. They "were able to witness a perfectly concentric solar 'annulus,' or ring, during mid-eclipse at 6:35 p.m. local time, with the sun about 10 degrees high in the northwestern sky," the pair said.

Other parts of the country saw a partial eclipse. The eclipse was first visible in East Asia before crossing the northern Pacific Ocean.

Annular eclipses only occur when the moon is at a point in its orbit that is too far from Earth to completely block the sun's disk. The result is a ringlike, or annulus, effect.