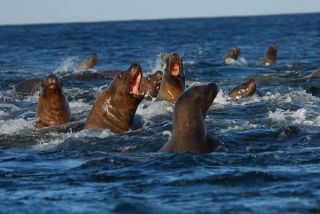 NOAA scientists are testing unmanned planes as a better approach to surveying populations of endangered Steller sea lions like these off of Finch Point, Seguam Island, Alaska.
(Image: © NOAA)

Since the 1970s, populations of Steller sea lions have dramatically declined in the western Aleutian Islands of Alaska, where they are protected under the Endangered Species Act. What exactly is responsible for the downturn is unknown, and is especially confounding given that sea lion populations to the southeast and in Russia are on the rise.

"Is it due to changes in climate? Is something eating them? What is causing all the animals to go away?" asked Greg Walker, a researcher at the University of Alaska Fairbanks. "Nobody knows for sure."

Pinpointing the cause of the Steller sea lion decline isn't solely an academic concern, as declines have helped lead to closing off fishing areas that cost local people millions of dollars, Walker said.

To find out what factors might have affected the species, Walker and a team of National Oceanic and Atmospheric Administration (NOAA)researchers set out in March on a three-week cruise, using two unmanned aircraft for the first time to collect aerial data on the creatures.  One, the Aeryon Scout, is a small, battery-powered, four-bladed helicopterlike aircraft with an on-board, sophisticated camera and video system.

The other is called the AreoVironment Puma AE and is a fixed-wing plane with a 10-foot (3 meters) wingspan, equipped with real-time video plus infrared and visual still photo capability.

Eleven scientists, engineers, pilots and NOAA Corps officers boarded the 108-foot (33 m) research vessel Norseman in Adak, Alaska, and embarked on a mission to study the winter diet of Steller sea lions, and used the unmanned craft at 54 sites, counting about 3,000 Steller sea lions over the course of the trip. [Images: Endangered Wildlife]

These craft can get closer to the animals and take better pictures than manned flights, which researchers have used throughout the animals' territory to take stock of various populations, from southeast Alaska along the Alaska Peninsula and west to Attu, the westernmost Aleutian island.

The Scout can fly for 25 minutes at a time, and during the March cruise, it made 30 flights over 14 sea lion sites, taking thousands of photos of sea lions and was able to take enough overlapping photos at one summer breeding location to produce a three-dimensional map.

The Puma can fly for up to two hours and made nine flights over nine sea lion sites. Researchers launched the aircraft from boats, and the fully waterproof Puma landed multiple times in the Bering Sea. During flights, the aircraft generally flew at around 300 feet (90 m) in altitude above sites where the sea lions rest and socialize.

Although they haven't yet figured out what's causing the drop-off, the scientists have gathered valuable clues, they said, and they will be evaluating the data and conducting more studies to learn what is plaguing this sea lion population.