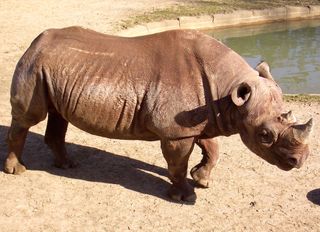 Jimma the black rhino is now a resident of the Windy City.
(Image: © Cleveland Metroparks Zoo)

Jimma made the six-hour trip by truck with a keeper from Cleveland who will stay in Chicago for a couple days to help the rhino acclimate to his new surroundings.

The transfer to Brookfield was recommended by the Black Rhino Species Survival Plan of the Association of Zoos and Aquariums. SSPs are cooperative breeding and management groups for endangered or threatened species including black rhinos, lowland gorillas, polar bears and African elephants.

The eastern black rhinoceros (Diceros bicornis michaeli) is classified as "critically endangered" in the wild by the International Union for Conservation of Nature, the primary organization for quantifying conservation assessment efforts. The IUCN estimates there are less than 1,000 of this rhino subspecies left in the wild, concentrated primarily in Kenya, South Africa and Tanzania.

Jimma came to Cleveland in 2005 from the Potter Park Zoo in Lansing, Michigan to meet the Zoo’s adult female rhino Inge. He sired two offspring during his time here, female Zuri in 2007, who now lives at the Oregon Zoo in Portland, and female Johari in 2010, who still lives in Cleveland. Jimma was born in 1990 at the San Diego Zoo Safari Park in California.