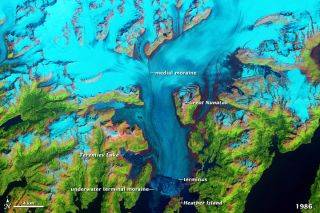 Alaska's Columbia Glacier, a majestic "river" of ice, is one of the most rapidly changing glaciers on Earth. Thirty years ago, the glacier began to shrink with unprecedented speed — and satellite images reveal the scale of the changes that have continued ever since.

The Columbia Glacier originates high in the Chugach Mountains, at an elevation of 10,000 feet (3,050 meters), and flows to the sea, emptying out into Prince William Sound in southeastern Alaska.

When British explorers first surveyed the glacier in 1794, it reached as far as Heather Island, a small island near the mouth of Columbia Bay.

The glacier didn't budge for almost a century, but in 1980, the glacier began a sudden retreat.

A 1986 satellite image, shown in false colors above, shows that the front edge of the glacier had begun to splinter and fall apart, giving birth to flotillas of icebergs. In the photograph, the glacier has retreated several kilometers north of Heather Island.

By 2011, the glacier had retreated more than 12 miles, as revealed in the image below.

As the glacier has retreated, it has also thinned substantially — as shown by the expansion of brown bedrock areas on either side of the glacier. Since the 1980s, the glacier has lost about half of its total thickness and volume.

The glacier's rapid retreat has also changed the way it flows. In the 1980s image, you can see the area where two branches of the glacier meet — it's called the medial moraine.

In the 2011 image, the glacier has shrunk so much that its two branches no longer meet; it is essentially two different glaciers, which is causing the splintering and melting to happen on two different fronts, instead of one.