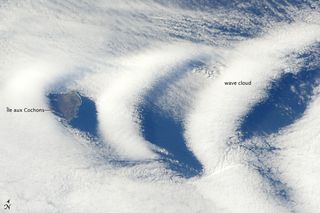 Wave clouds were photographed over the southern Indian Ocean island of
(Image: © NASA)

The arresting shape of so-called wave clouds were caught on camera by an astronaut on board the International Space Station as it flew over the southern Indian Ocean.

The clouds appear over the uninhabited Île aux Cochons ("Pig Island"), which lies about 3,000 kilometers (1,900 miles) southeast of South Africa and 1,400 miles (2,300 kilometers) northwest of Antarctica. It is the westernmost of the islands in the sub-antarctic Crozet Archipelago, part of the French Southern and Antarctic Lands, and an important seabird breeding area. The largest colony of king penguins is found there. Only the a section of the eastern coastline is visible in the image.

The island is a stratovolcano that is thought to have erupted within the last 12,000 years, though humans have never recorded an eruption.

The summit of the island's peak is high enough — at 2,543 feet (775 meters) above sea level — that it can interact with cloud layers and with winds flowing past the island. When air masses run up over the mountain, moisture-laden air rises and cools, causing water vapor to condense into clouds.

There are actually two layers of cloud types in the image: At lower levels, "clouds streets" have formed, and their pattern suggests the winds at that level are blowing out of the west, according to a NASA statement.

The wave clouds sit at higher levels. The form when the air mass passes over the summit and descends, and encounters alternating moist and dry air layers, enabling the formation of the discontinuous, chevron-shaped wave clouds.