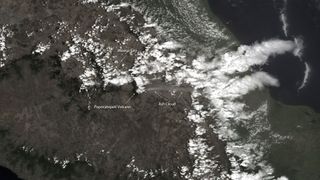 Mexico's Popocatépetl volcano, which lies only about 40 miles away from Mexico City, dusted nearby areas with ash this week in one of its largest explosions in recent years. The eruption, combined with a billowing plume of steam and ash and increased seismic activity, has prompted authorities to raise the volcano's alert status and advise people to stay at least seven miles away from the summit.

The eruption covered about 30 communities with ash, ranging from a light dusting to up to 7 centimeters (2.8 inches), according to Wired's Eruptions Blog.

There are signs that new magma inside the volcano is near the surface, says Eruptions Blog author Erik Klemetti, a professor of geosciences at Denison University in Ohio.

Popocatépetl, whose name means "smoking mountain" in Aztec, is the second highest volcano in North America, at 17,802 feet (5,426 meters). Only Mexico's Pico de Orizaba is taller.

The volcano's alert status has been raised to Yellow Stage 3, the third highest stage, by Mexico's National Center for Prevention of Disasters. There are seven total alert stages.

For several days, the volcano has been emitting a strong sulfur dioxide plume, mixed with steam (the volcano has several glaciers at its summit) and more occasional bursts of ash, according to the U.S. National Oceanic and Atmospheric Administration's Volcanic Ash Advisory.

The joint NOAA-NASA Suomi NPP satellite snapped a picture of the ash cloud coming from Popocatépetl on April 16.

Klemetti says that the main concerns from the new volcanic activity are further ash falls, lahars ("lahar" is an Indonesian word for a rapidly flowing mixture of rock debris and water) and possibly pyroclastic flows (a fast-moving current of extremely hot gas and rock, which travels away from the volcano at very high speeds, though those have been fairly rare in the last few hundred years).

The new alert status means that authorities are preparing for possible evacuations. The last time areas around the volcano were evacuated was when the volcano erupted in December 2000.

Popocatépetl has been active since 1994, when it woke from a 70-year slumber, according to a NASA statement.