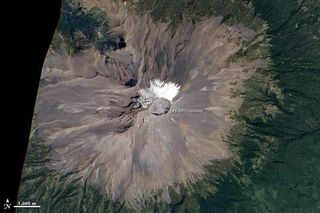 Popocatépetl Volcano one of North America's most active volcanoes has been erupting since January 2005.

The volcano, which towers over central Mexico, vents almost constantly from fumaroles, openings in the Earth's crust that emit steam or gases. This low-level background is punctuated by minor steam, gas, and ash emissions .

Plumes are occasionally visible from Mexico City, only 40 miles (70 kilometers) to the northwest.

Popocatépetl is the second-highest peak in Mexico at about 17,800 feet (5,426 meters) high. Spanish monasteries on the slopes of the mountain are a World Heritage Site .

According to the Mexican National Center for Disaster Prevention (CENAPRED), Popocatepél is likely to continue its mild activity with some ash emissions and incandescent fragments close to the volcano's crater possible.