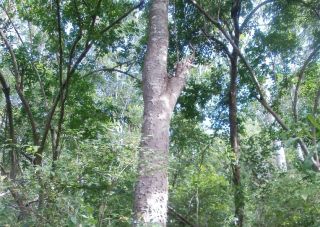 Two tree species once feared extinct have been discovered in a threatened coastal forest in the African country of Tanzania. The two species have made reappearances before, but both trees, one a legume, the other a member of the mint family, were thought to have finally been obliterated in recent years.

Botantists rediscovered the trees in the southeastern African nation in 2011. The country has offered up another, perhaps more striking, discovery in recent months: a colorful new snake species.

"Both trees are still in critical danger of extinction, given that fewer than 50 individuals of each species are known," Roy Gereau, a botanist with the Missouri Botanical Garden's Africa and Madagascar Department, said in a statement.

The species, Erythrina schliebenii, a type of coral tree, has spectacular red flowers and vicious spines along its trunk. The tree was collected only twice, in the 1930s, from an area later cleared for a cashew plantation.

It was listed as "Extinct" on the IUCN Red List in 1998, but was rediscovered in a small patch of unprotected forest in 2001. When that forest was cleared for a biofuel plantation in 2008, it was again feared the thorny tree had gone extinct.

The other tree species, Karomia gigas, was known from only a single specimen cut down a few years after it was first discovered in coastal Kenya in 1977. Another specimen was discovered in 1993 nearly 400 miles (600 kilometers) away in a tiny fragment of forest in Tanzania, but a more recent search at the same site didn't uncover any of the trees.

Last year, botanists from Tanzania's University of Dar es Salaam set out to look for both species, and discovered small populations of both trees in a remote coastal forest in southeastern Tanzania.

There are indications that recent improvements in infrastructure, together with a rapid population increase, are putting the coastal forests of the region under increasing threats from degradation and clearing.

"Erythrina schliebenii has survived only because it grows in rocky areas that are not usually cleared for cultivation," University of Dar es Salaam botanist Cosmas Mligo said in a statement. "But even those areas will be cleared one day if nothing is done."