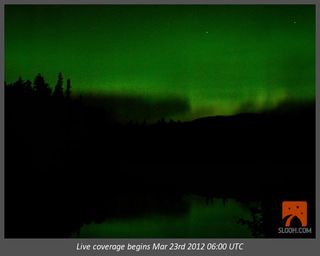 The sun has been causing a commotion lately, sending out a barrage of solar storms that have fired up Earth's auroras, to the delight of those who live in far northern latitudes. Now, with the help of a webcam in Alaska, those who live outside of the usual range of the northern lights will get a chance to watch their eerie dance.

The Slooh Space Camera, located outside of Fairbanks, Alaska, will be streaming live starting at 11:00 p.m. PDT (2:00 a.m. EDT) today, March 22 (06:00 UTC March 23), with astronomer Bob Berma on-site to commentate throughout the show.

The sun exploded with activity earlier this month when two huge solar flares erupted from its surface late on March 6. After traversing the distance between the sun and Earth at 4 million mph (6.4 million kph), the erupted material — called a coronal mass ejection (CME) — battered our planet's magnetosphere, the shroud that surrounds the Earth and protects it from some of the sun's most dangerous particles.

The CME only dealt the planet a glancing blow, but the energetic particles within it interacted with the Earth's magnetic field and set off spectacular auroras seen in many locales at higher latitudes in the Northern Hemisphere.

Observing the aurora borealis can be tricky unless the display is unusually intense or if you live in the northern third of the United States and observe away from interfering city lights, where the sky is much darker.

Light pollution isn't a problem where the Slooh camera is located, though, as central Alaska sits directly under the auroral oval and can see the Northern Lights most nights when the sun is active, like now.

The live webcast can be viewed on Slooh's homepage and a panel will interact live with viewers via Google +'s Hangouts On Air. You can also follow along on twitter with the hastag #sloohviewer.