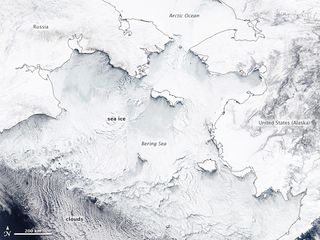 Sea ice forms in the Bering Sea and other parts of the larger Arctic Ocean system every winter, but the winter of 2011-2012 has seen the second highest ice extent in the satellite record for the Bering Sea region, according to the National Snow and Ice Data Center (NSIDC).

The Moderate Resolution Imaging Spectroradiometer (MODIS) on NASA's Aqua satellite snapped a picture of the ice in the Bering Sea, along with the Russian and Alaskan coasts, on March 19.

The ice accumulated in the Bering Sea because of persistent northerly winds blowing from the Arctic Ocean across the Bering Strait. Those winds have pushed ice toward the narrow, shallow strait, where it piles up.

Beyond the straight, the winds also push cold air and cold surface waters to lower latitudes, allowing the ice to grow farther south than usual.

As of March 16, National Weather Service forecasters noted that all of the ice cover in the Bering Sea was first-year ice, much of it new and thin. Thin, first-year ice typically melts faster than older, thicker ice in the summer, exposing more open ocean to the sun's rays. Water absorbs sunlight, while ice reflects incoming rays back to space. More ice melt in the Arctic exposes more of the ocean to heating from the sun, which fuels further melt in a cycle called a feedback loop.

In fact, open ocean was the problem for the rest of the Arctic Ocean, where sea ice extent was below average in January and February. In the Kara, Barents, and Laptev Seas, ice-free waters were 7 to 14 degrees Fahrenheit (4 to 8 degrees Celsius) above the norm.

The widespread and persistent ice cover in the Bering Sea has posed its own problems, particularly for fisherman and supply ships in the region. The weather driving the ice has also brought extreme snowfall events to many parts of Alaska this winter.