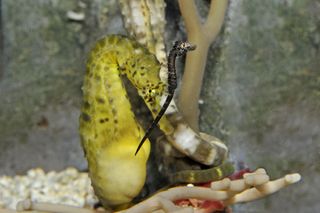 The dark coloring of a baby pot-bellied seahorse contrasts to the lighter color of an adult.
(Image: © Julie Larsen Maher © WCS)

A herd of baby pot-bellied seahorses are the newest additions to the Wildlife Conservation Society's New York Aquarium.

The arrival of the aquatic newborns (known as fry, not ponies) is a boon to the survival of the species as they are endangered.

"It is very exciting to announce the successful propagation of these pot-bellied seahorses," said Jon Forrest Dohlin, a WCS vice president and director of the aquarium. "The birth of any threatened species helps us further our goal of educating and enlightening people about marine life and ecosystems."

Pot-bellied seahorses, native to Australian seas, are protected under CITES (Convention on International Trade in Endangered Species of Wild Fauna and Flora) because they are often collected for traditional medicine, and the pet and curio trade. Without strict CITES regulations in place, this animal could face future extinction.

Seahorses have a unique way of procreating: The male is the one who gives birth.

The cycle starts when the female deposits approximately 1,500 eggs in the male's brood pouch where they are then fertilized.  The male holds the eggs for about a month until they hatch and the babies swim out on their own. They are born black but lighten in color as they mature.

When the babies are born they are moved to a separate tank because of their fragility. Because their mouths are so small, keepers make sure they have plenty of tiny food. Their diet consists mainly of freshly hatched brine shrimp. When they are big enough and can eat larger food pieces, keepers will return them to the exhibit with the adults.

Pot-bellied seahorses can grow to be up to 13.5 inches (34 centimeters).

The new babies can be seen in the aquarium’s seahorse hall alongside other species such as northern and southern seahorses and pipefish.