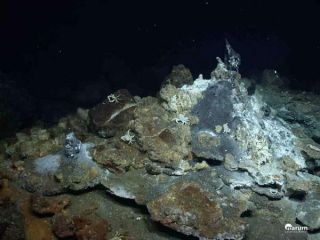 The hydrothermal vent crab Segonzacia on a mound that is covered with white bacteria and mineral precipitates.
(Image: © MARUM)

VANCOUVER, British Columbia — To give landlubbers a glimpse of life in the ocean abyss, French researcher Bruce Shillito has designed a type of tank, which he calls the “abyss box,” that keeps deep-sea life alive in an aquarium.

"Approximately 75 percent of the global ocean volume is below 1,000-meter depth," Shillito, from Pierre and Marie Curie University in Paris, said here at the annual meeting of the American Association for the Advancement of Science. "The deep ocean is at least half of the biosphere, about half of the actual space where you can have life on Earth."

The abyss box needs to be extremely pressurized to mimic the environment deeper than 6,500 feet (2,000 meters) in the oceans, where the pressure is 200 times that at the surface. Most of these creatures would die within hours of reaching the surface without a pressurized tank.

It's the only high-pressure aquarium that has a portal for viewing the life inside. The pressure on this small portal — about a foot (30 centimeters) wide — is greater than the weight of a jumbo jet.

The tank is specially designed to admit food from the outside and keep these precious animals alive for the long term. It will be used to display deep-sea vent crabs and shrimp in an exhibit set to open at Oceanopolis aquarium in Brest, France, April 6.

"We wanted the fauna to be readily accessible to the people who are there to watch these animals," Shillito said. "It will allow the public to see the beauty and fragility of deep-sea life."

It may soon be possible to have a deep-sea creature like the hagfish or anglerfish on display, though the cost and logistics currently make it very difficult. Even a small aquarium containing less than 5 gallons (16 liters), like those being used in the exhibition, weighs more than 1,300 pounds (600 kilograms).

The abyss box and other high-pressure tanks are useful in the lab to allow scientists to study these mysterious creatures. "We still know very little about the way deep-sea animals may respond to changing conditions," Shillito said. "More investigations on live animals are essential to test acclimation potential of these species with respect to environmental changes expected in deep waters."