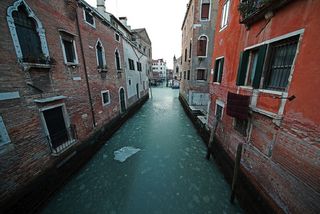 This winter has been an odd one so far in Italy. Earlier in February, Rome saw a surprisingly heavily snowfall. Later in the month, Venice's famous canals froze, as seen in the above picture.

Until this past weekend, much of North America -- except for Alaska -- has enjoyed a mild winter. The return of La Niña, a naturally occurring climate phenomenon featuring cooler-than-average Pacific Ocean temperatures that influences global weather patterns, has pushed the jet stream north, which is partly to blame for Alaska's snowy winter. But in the European region, the effects of La Niña are relatively weak and variable, according to the Met Office, the UK's weather service.

Regardless, cold air pouring southward into southern and eastern Europe has created a brutal winter. The cold has been blamed for tens to hundreds of deaths, according to news reports.