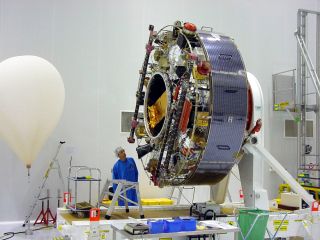 Cold, electrically charged particles have long been suspected to exist tens of thousands of miles above the Earth's surface, and now scientists have detected such ions there for the first time. And they are significantly more abundant at those heights than previously imagined.

Cold is, of course, a relative term. Although these low-energy ions are 1,000 times cooler than what researchers might consider hot plasma, these particles still have an energy that would correspond to about 1 million degrees Fahrenheit (500,000 degrees Celsius). But because the density of the "cold" ions in space is so low, satellites and spacecraft can orbit through them without getting destroyed.

Scientists had detected the ions at altitudes of about 60 miles (100 kilometers), but for decades, researchers wanted to look for them much higher, between 12,400 and 60,000 miles (20,000 and 100,000 km). Knowing how many cold ions dwell up there could help better understand how our planet interacts with storms of charged particles from the sun — like the one that slammed into the planet yesterday (Jan 24) — that create auroras, damage satellites and sometimes wreak havoc with power grids on Earth.

However, detecting cold plasma at those high altitudes has proven difficult. Spacecraft that far up accumulate an electrical charge, due to sunlight that makes them repel the cold ions.

The breakthrough came with one of the European Space Agency's four CLUSTER spacecraft. These are equipped with a detector composed of thin wire arms that measure the electric field between them as the satellite rotates.

"It is surprising we found the cold ions at all with our instrument," researcher Mats André, a space scientist at the Swedish Institute of Space Physics in Uppsala, told OurAmazingPlanet. "It was not at all designed to do this. It was designed to observe electric fields."

Two mysterious trends appeared when the scientists analyzed data from these detectors — strong electric fields turned up in unexpected regions of space, and as the spacecraft rotated, the measurements of the electrical fields did not fluctuate in the smoothly changing manner that investigators expected.

Their findings suggest that cold plasma was influencing electrical fields around the satellite. Once the scientists understood that, they could measure how much of the once-hidden ions there were.

"The more you look for low-energy ions, the more you find," André said. "We didn't know how much was out there. It's more than even I thought."

Although the concentration of the previously hidden cold ions varies, about 50 to 70 percent of the time the researchers find they make up most of the mass of high-altitude zones. These previously elusive low-energy ions were detected even at altitudes of about 60,000 miles (100,000 km), about a third of the distance to the moon. Finding so many relatively cool ions in those regions is surprising, because the solar wind blasts Earth's high altitudes.

"It is surprising that there were so many cold ions," André said. "There have been hints for a long time, and with previous spacecraft, but I do not think anyone, not me, thought this cold, hidden population could dominate so-large volumes, [for] so-large fractions of the time."

Space physicists have struggled to accurately determine how many low-energy ions are leaving the planet. The new findings suggest that about two lbs. (1 kilogram) of cold plasma escape from Earth's atmosphere every second.

Knowing that rate of loss for Earth might help scientists better figure out what became of the atmosphere of Mars, which is thought to once have been denser, and more similar to Earth's. The new cold plasma results might also help researchers explain atmospheric traits of other planets and moons, including alien worlds or exoplanets, André said.

"If someone is living on an exoplanet, they probably want an atmosphere that is not blowing away," André said.

Moreover, as scientists further map cold plasma around Earth, they could discover more about how it reacts during solar storms and other events, deepening our understanding of space weather. André compared the swaths of low-energy ions to a low-pressure area in our familiar, down-to-Earth weather. "You may want to know where the low-pressure area is, to predict a storm," he said.

André and his colleague Christopher Cully detailed their findings Dec. 23 in the journal Geophysical Research Letters.