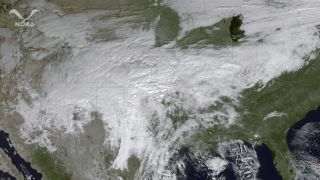 This image was taken by NASA's GOES East satellite on Dec. 19.
(Image: © NOAA/NASA.)

It's beginning to look a lot like Christmas in the Midwest. A fast approaching snow storm could be a doozy in the country's midsection, according to forecasters.

A developing low-pressure system is expected to spread snow across northeast New Mexico and into Kansas from today (Dec. 19) into Tuesday with possible blizzard conditions, according to the U.S. National Oceanic and Atmospheric Administration (NOAA).

Areas of the country on the northern edge of the weather system will see a strong pressure gradient, causing gusty winds, blowing snow and poor visibility. There is warm air ahead of the low-pressure system so a slight risk of severe thunderstorms is forecast to move from southeastern Texas today into the lower Mississippi Valley on Tuesday.

Many places in the storm's path are expecting 6 to 12 inches (15 to 30 centimeters) of snow. The Dodge City, Kan., National Weather Service (NWS) office has issued a major winter storm warning through early Tuesday. They are forecasting up to 14 inches (36 cm) of snow. Colorado, Oklahoma and Texas could also see strong winds and heavy snow.

Snow has already been falling today in New Mexico and in parts of Texas and Oklahoma. Wind gusts up to 50 mph (80 kph) are expected in the region.

Maps of the nation's snow cover have shown a lotless white stuff covering the country right now compared with this time last year. In mid-December last year, the Deep South was reeling from an unusually big snowfall. This year, snow has been scarce on the East Coast and in the Midwest.

This time last year, lake-effect snow in the Northeast and Midwest was falling hard. The snow was so bad in Buffalo, N.Y., that ev

en the snowplows got stuck. Several feet of snow fell in western New York and in cities around the Great Lakes. That hasn't happened yet this year because there hasn't been much cold air blowing through the Midwest.