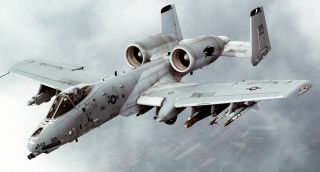 An A-10 Thunderbolt from the 81st Fighter Squadron, Spangdahlem Air Base, Germany.
(Image: © US Air Force)

One of the military's feared tank killers, the A-10 Thunderbolt, will soon start its new career as a storm chaser.

The retired plane is getting a $13 million scientific makeover so that it can fly though some of nature's biggest storms and withstand hail and lightning strikes, reported Science magazine (Subscription required). Also known as the Warthog, the Thunderbolt is not the prettiest plane, but it will gather data that will be beautiful in the eyes of storm-chasing scientists.

The Thunderbolt will replace a T-28 military trainer that retired in 2005 after 35 years chasing storms. That plane was limited by the number of instruments it could carry, and the retro-fitted Thunderbolt will carry more instruments. It will also fly higher and linger in storms longer. The plane's 30-millimeter cannon will be dismounted and replaced with scientific instruments. "Hard points" under the wings will carry sensors and instruments instead of bombs and missiles.

The U.S. Navy's Naval Postgraduate School in Monterey, Calif., will acquire and operate the Thunderbolt. Former A-10 pilots will command the planes into the heart of the storms.

Severe weather scientists have other ways to see inside a storm from afar — weather balloons and storm skirting aircraft — but the best data is found in the heart of the bad weather.

"You really have to go right into the storm to get the most useful data," meteorologist Terry Schuur told Science. Schuur works at the National Oceanic and Atmospheric Administration's (NOAA) National Severe Storms Laboratory in Norman, Oklahoma.

The National Science Foundation, which is funding the conversion, expects to have the planes back in the sky by 2013.