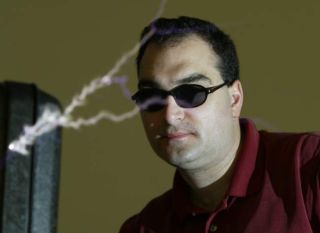 Pete Bitar, president of Xtreme Alternative Defense Systems, looks over the output from a demonstration unit of a directed-energy weapon at the company's offices in Anderson, Ind., Thursday, July 29, 2004. The company is developing a rifle-sized, directed-energy gun for the Marines. The device works by creating an electrical charge through a stream of ionized gas, or plasma. (AP Photo/Michael Conroy)

ARLINGTON, Va. (AP) -- For years, the U.S. military has explored a new kind of firepower that is instantaneous, precise and virtually inexhaustible: beams of electromagnetic energy. "Directed-energy'' pulses can be throttled up or down depending on the situation, much like the phasers on "Star Trek'' could be set to kill or merely stun.

Such weapons are now nearing fruition. But logistical issues have delayed their battlefield debut -- even as soldiers in Iraq encounter tense urban situations in which the nonlethal capabilities of directed energy could be put to the test.

"It's a great technology with enormous potential, but I think the environment's not strong for it,'' said James Jay Carafano, a senior fellow at the conservative Heritage Foundation who blames the military and Congress for not spending enough on getting directed energy to the front. "The tragedy is that I think it's exactly the right time for this.''

The hallmark of all directed-energy weapons is that the target -- whether a human or a mechanical object -- has no chance to avoid the shot because it moves at the speed of light. At some frequencies, it can penetrate walls.

Since the ammunition is merely light or radio waves, directed-energy weapons are limited only by the supply of electricity. And they don't involve chemicals or projectiles that can be inaccurate, accidentally cause injury or violate international treaties.

"When you're dealing with people whose full intent is to die, you can't give people a choice of whether to comply,'' said George Gibbs, a systems engineer for the Marine Expeditionary Rifle Squad Program who oversees directed-energy projects. "What I'm looking for is a way to shoot everybody, and they're all OK.''

Almost as diverse as the electromagnetic spectrum itself, directed-energy weapons span a wide range of incarnations.

Among the simplest forms are inexpensive, handheld lasers that fill people's field of vision, inducing a temporary blindness to ensure they stop at a checkpoint, for example. Some of these already are used in Iraq.

Other radio-frequency weapons in development can sabotage the electronics of land mines, shoulder-fired missiles or automobiles -- a prospect that interests police departments in addition to the military.

A separate branch of directed-energy research involves bigger, badder beams: lasers that could obliterate targets tens of miles away from ships or planes. Such a strike would be so surgical that, as some designers put it at a recent conference here, the military could plausibly deny responsibility.

The flexibility of directed-energy weapons could be vital as wide-scale, force-on-force conflict becomes increasingly rare, many experts say. But the technology has been slowed by such practical concerns as how to shrink beam-firing antennas and power supplies.

Military officials also say more needs to be done to assure the international community that directed-energy weapons set to stun rather than kill will not harm noncombatants.

Such issues recently led the Pentagon to delay its Project Sheriff, a plan to outfit vehicles in Iraq with a combination of lethal and nonlethal weaponry -- including a highly touted microwave-energy blaster that makes targets feel as if their skin is on fire. Sheriff has been pushed at least to 2006.

"It was best to step back and make sure we understand where we can go with it,'' said David Law, science and technology chief for the Joint Non-Lethal Weapons Directorate.

The directed-energy component in the project is the Active Denial System, developed by Air Force researchers and built by Raytheon Co. It produces a millimeter-wavelength burst of energy that penetrates 1/64 of an inch into a person's skin, agitating water molecules to produce heat. The sensation is certain to get people to halt whatever they are doing.

Military investigators say decades of research have shown that the effect ends the moment a person is out of the beam, and no lasting damage is done as long as the stream does not exceed a certain duration. How long? That answer is classified, but it apparently is in the realm of seconds, not minutes. The range of the beam also is secret, though it is said to be further than small arms fire, so an attacker could be repelled before he could pull a trigger.

Although Active Denial works -- after a $51 million, 11-year investment -- it has proven to be a "model for how hard it is to field a directed-energy nonlethal weapon,'' Law said.

For example, the prototype system can be mounted on a Humvee but the vehicle has to stop in order to fire the beam. Using the vehicle's electrical power "is pushing its limits,'' he added.

Still, Raytheon is pressing ahead with smaller, portable, shorter-range spinoffs of Active Denial for embassies, ships or other sensitive spots.

One potential customer is the Department of Energy. Researchers at its Sandia National Laboratories are testing Active Denial as a way to repel intruders from nuclear facilities. But Sandia researchers say the beams won't be in place until 2008 at the earliest because so much testing remains.

In the meantime, Raytheon is trying to drum up business for an automated airport-defense project known as Vigilant Eagle that detects shoulder-fired missiles and fries their electronics with an electromagnetic wave. The system, which would cost $25 million per airport, has proven effective against a "real threat,'' said Michael Booen, a former Air Force colonel who heads Raytheon's directed-energy work. He refused to elaborate.

For Peter Bitar, the future of directed energy boils down to money.

Basically, it fires a bolt of lightning. It can be tuned to blow up explosives, possibly to stop vehicles and certainly to buzz people. The strike can be made to feel as gentle as "broom bristles'' or cranked up to deliver a paralyzing jolt that "takes a few minutes to wear off.''

Bitar, who is of Arab descent, believes StunStrike would be particularly intimidating in the Middle East because, he contends, people there are especially afraid of lightning.

At present, StunStrike is a 20-foot tower that can zap things up to 28 feet away. The next step is to shrink it so it could be wielded by troops and used in civilian locales like airplane cabins or building entrances.

Xtreme ADS also needs more tests to establish that StunStrike is safe to use on people.

But all that takes money -- more than the $700,000 Bitar got from the Pentagon from 2003 until the contract recently ended.

Bitar is optimistic StunStrike will be perfected, either with revenue from the laser pointers or a partnership with a bigger defense contractor. In the meantime, though, he wishes soldiers in Iraq already had his lightning device on difficult missions like door-to-door searches.

"It's very frustrating when you know you've got a solution that's being ignored,'' he said. "The technology is the easy part.''