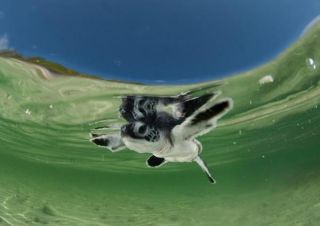 A newly published book is offering an intimate and colorful look at a fragile and increasingly imperiled ecosystem that is home to an astonishing number of the planet's sea creatures.

The coffee-table book, titled "The Coral Triangle," for the region of this name in the South Pacific , is 272 pages long, filled with more than 400 photographs that are interspersed with essays written by conservation experts from around the world.

The book, published by conservation organization WWF, the Asian Development Bank and the Freund Factory, profiles the region's astounding marine biodiversity, its human residents, and the long list of threats facing both populations, from overfishing to climate change .

In both images and words, the tome offers a detailed portrait of a region of vital importance. The Coral Triangle, a 230,000-square-mile (6-million-square-kilometer) region of the southern Pacific Ocean, encompasses waters of Indonesia, Malaysia, the Philippines, Papua New Guinea, the Solomon Islands and Timor-Leste, and is home to an outsize proportion of the world's sea creatures. [See a gallery of images from the book here .]

More than 75 percent of the globe's coral species live in the area, along with whales, dolphins, sharks, six out of seven of the world's seafaring turtle species , and more than 100 million people.

In addition, the region is a key source of food. Some 30 percent of the world's tuna come from the Coral Triangle .

"It has the richest marine life. All the superlatives belong to this area," said Stella Chiu-Freund, who, along with her husband Jürgen, spent 18 months on the ground and in the water to produce the new book.

The Freunds, a powerhouse husband-and-wife team (he takes the pictures, she's in charge of just about everything else), set out to capture on camera the region's beauty and its troubles, and to meet the people who depend upon the area's sea life for everything from food to economic development.

OurAmazingPlanet reached the Freunds in their Jakarta, Indonesia, hotel room, a day after the book was launched at a reception attended by environment ministers from Coral Triangle countries and from larger donor nations around the world.

Despite the book's often idyllic subject matter, Jürgen said the tropical odyssey was at times quite grueling. The project began in April 2009, and was only scheduled to last three months. But the couple quickly realized that to profile such a vast and diverse region would require much more time.

"We wanted to squeeze as much as possible into the trip we never had vacation," he said. "We were shooting 430 days, and the rest was traveling time and processing time of images."

"The logistics was a real nightmare, but a nightmare we knew we could overcome because we're not fussy," Stella said.

Making travel arrangements while toting around many pounds of high-tech photographic equipment in tiny boats while hundreds of miles from an Internet connection is just part of the job, Stella explained. "The best pictures always come about when we're uncomfortable," Jürgen said, laughing.

The couple met more than a decade ago, on a WWF project. Stella, a documentary producer in her native Philippines, and Jürgen, a German-born wildlife photographer, have been working together ever since.

Although "The Coral Triangle" will be launched in the United States in early November, it's not clear if it will be sold in book stores. For now, the volume is available in only a limited run. So far only a few thousand copies have been printed, and they have been provided to government officials and donors who are helping with conservation efforts in the Coral Triangle .

The Freunds said that, at the book's Jakarta debut, it was satisfying to see it in the hands of those who may spend the majority of their time in faraway office buildings, far from the remote islands and reefs of the region.

"Having these guys get to see what it is that they're trying to protect and save was really great," Stella said.