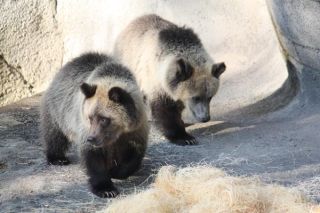 Two orphaned grizzly bear cubs who found a new home at the Cleveland Metroparks Zoo have new names thanks to fans who voted online. Say hello to Cheyenne and Jackson.

Cheyenne and Jackson stormed out of the gate in first place on the very first day and stayed there the entire 10 days of voting, with Cheyenne receiving 43 percent of the female name votes and Jackson receiving 42 percent of the male name votes. The Zoo thanks everyone who took the time to vote. Votes were cast from 41 different states, with 1,415 being cast for the female cub and 1,364 being cast for the male cub.

The little bear brothers traveled to Cleveland from Montana, where they were being cared for in a wildlife rehabilitation facility.

A man looking for shed antlers in the Blackfoot-Clearwater Wildlife Management Area near Helena, Montana startled the cubs' mother. The man shot the mother grizzly in self-defense and the cubs were taken in by the Montana Department of Fish, Wildlife & Parks.

Grizzly bears (Ursus arctos horribilis), a subspecies of brown bear, were once widespread throughout the U.S. and Canada. Their range has shrunk toward the northwest with most now occurring in Alaska and western Canada, although their numbers are on the rise in some areas of the contiguous U.S., especially in and around Yellowstone National Park.

Voters were asked to choose one female name and one male name each from a list of five potential choices on clemetzoo.com. The names were selected by the Zoo to represent the history and geography of the cubs' home state of Wyoming.

In the poll for the female cub's name Cheyenne finished with 43 percent of the votes cast followed by Belle with 22 percent, Jade with 16, Nellie with 13 and Wedu with 7.

The race for the male cub's name was only a little bit closer with Jackson finishing with 42 percent of the vote followed by Casper with 27 percent. Wakinu was third with 13 percent, followed by Clark with 10 and Lewis with 7.

Cheyenne and Jackson joined Montana grizzly cub brothers Cody and Cooper on exhibit last week. Group introductions between the four bears have gone well and the bears now spend time on exhibit together every day. Keepers continue to allow them to have access to their indoor holding facilities throughout the day in case one of them feels the need to take a break from the others for a while.

All four cubs are about 7 months old and weigh between 70 and 85 pounds.

Northeast Ohio's most visited year-round attraction, Cleveland Metroparks Zoo is open 10 a.m. to 5 p.m. daily. Admission is $11 per person, $8 for kids ages 2 to 11 and free for children younger than 2 and Zoo members. Parking is free. Located at 3900 Wildlife Way, the Zoo is easily accessible from Interstates 71, 90 and 480.