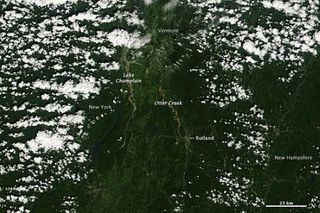 Record-setting water levels in the swollen rivers in 10 states along the East Coast are yet another testament to Hurricane Irene's devastation.

More than 80 U.S. Geological Survey (USGS) stream gauges measured record peaks in the aftermath of Hurricane Irene. Rivers in the Northeast set the bulk of the records, as higher than average precipitation the past few weeks had saturated the ground in many locations prior to Irene's arrival. States such as Vermont and New York have seen devastating flooding as a result of the rainwater glut.

While some rivers have already crested, or reached their highest levels, other rivers are still expected to rise further.

Immediately after the worst of the storm had passed, USGS hydrologists from North Carolina to Maine deployed to measure high-water marks at rivers and streams and to verify high river flows and peak stages. The crews also calibrated and repaired stream gauges damaged by the storm to ensure they continued to transmit information in real time to users working to protect lives and property.

The USGS, in cooperation with state and federal agencies, operates a nationwide network of more than 7,000 stream gauges on inland rivers and streams. Real-time information from these stream gauges are available online.

Where the records were set: