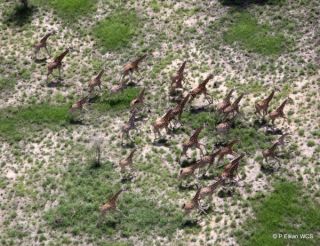 Giraffes are just some of the amazing wildlife in Southern Sudan.
(Image: © WCS.)

The newest nation in the world will host some of the world's most amazing wildlife.

South Sudan, a land-locked country in East Africa, celebrated its independence July 9 from the rest of Sudan. The new country already has a wealth of wildlife, however, including one of the world's longest animal migrations , which could be a boon to the nation's economy.

Mammal migrations in South Sudan rival those of the Serengeti . They have survived decades of war, and vast tracts of savannas and wetlands remain largely intact, according to the WCS. South Sudan boasts some of the most spectacular and important wildlife populations in Africa. Boma National Parknear the border with Ethiopia, the Sudd wetland and Southern National Park near the border with Congo are home to hartebeest, kob and topi (antelope species ), buffalo,elephants, giraffes and lions.

The southeast part of the country supports the world's second-largest terrestrial wildlife migration of about 1.3 million white-eared kob, tiang and reedbuck antelopes and Mongalla gazelle.

South Sudan's wildlife migrations provide the opportunity to create a thriving tourism industry if properly managed, the WCS says. In neighboring Kenya, tourism contributed an estimated $1 billion to the national economy in 2009. In Tanzania, tourism accounted for close to $1.2 billion in the same year.