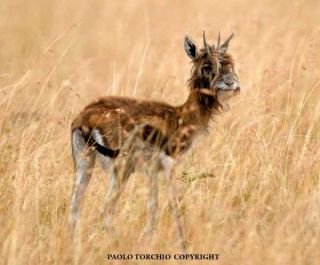 This strange, bearded antelope was seen just a few weeks ago in Kenya. It's not clear why this young creature looks so different from its kin.
(Image: © Paolo Torchio.)

When Paolo Torchio set out across Kenya's Masai Mara National Reserve a few weeks ago, it was just a typical Thursday morning for the veteran wildlife photographer, who has lived and worked in Kenya for two decades.

Torchio is intimately acquainted with the beasts that wander the nearly 600-square-mile (1500-square-kilometer) game reserve, so he was astonished to see a terrier's face poking out of the tall grass.

"I was wondering, what is this dog doing?" Torchio said. "And when it came out from the grass, that was a surprise."

The hirsute creature that emerged was clearly not a dog. The animal had all the markings of a Thomson's gazelle (a type of antelope) but, like that old song from Sesame Street, one of these kids was not like the others. This animal was covered with a strange, thick coat of hair, in stark contrast to the sleek Thomson's gazelles in its company.

"The funny aspect was that it wasn't affecting the relations with the other gazelles," Torchio said in a phone interview. "There was no problem between her and the other one."

Torchio crept alongside the shaggy creature for 15 minutes, snapping pictures, but eventually the spooked animal sped away. The Italian photographer spent the next five days trying to find the gazelle, but to no avail.

Experts are not quite sure what to make of the fluffy little gazelle, especially since Torchio's photographs are the only known example of such a beast.

"From the looks of it, it's definitely a Thomson's gazelle, and I would say it's a younger female, based on the body and the horn size," said Lanny Brown, a zookeeper at the Phoenix Zoo in Arizona, and the man in charge of maintaining Thomson's gazelle populations for all of North America.

Brown told OurAmazingPlanet that neither he nor any of his colleagues knew of any documented cases of a hairy Thomson's gazelle, or any kind of antelope, but he suggested that perhaps the animal is suffering from hypertrichosis, a condition once known as 'werewolf syndrome' in less politically correct times that can affect both animals and humans. As the name suggests, a genetic slip-up causes excess hair to grow all over the body.

Or, Brown said, it could be that the gazelle has Cushing's disease, a hormonal disorder seen in various animals. The condition is particularly common among horses, and the affected animals often look like an overgrown poodle.

Despite its unusual hairiness, Brown said, the fact that the little gazelle has made it this far bodes well for its future.

"Generally, a mother gazelle is pretty paranoid if something is wrong with a calf. It takes a lot of energy, effort and risk to raise a calf," Brown said.

The fact that this furry gazelle wasn't rejected by its mother suggests that whatever is causing the excess hair either wasn't present when the gazelle was born, or that the condition isn't causing obvious health problems.

Brown added that he doubted the extra whiskers would slow down a Thomson's gazelle, a creature for whom speed is a key weapon against predators. The spry mammals are among the fastest on land, running at speeds up to 55 and 60 mph (89 and 97 kph).

And even though this female may look a little funny, Brown doesn't foresee any trouble come mating season.

See more photos at Paolo Torchio's Website. His photographs of the gazelle first appeared on the Kenya and U.S.-based nature conservation Website WildlifeDirect.