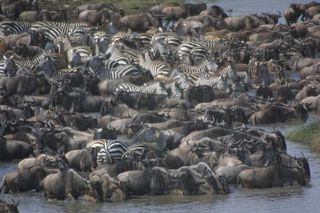 Zebra and wildebeest migrations across the Serengeti may be endangered.
(Image: © WCS.)

A proposed road through the Serengeti could jeopardize one of the largest migrations of land animals in the world, conservationists warn.

The proposed Arusha-Musoma highway would slice through the northern portion of one of the world's best- known wildlife sanctuaries , Serengeti National Park in Tanzania.

Conservation groups are pleading with the Tanzanian government to look at other routes to meet the transportation needs of the region, according to the Wildlife Conservation Society (WCS) and the Zoological Society of London (ZSL).

As planned, the highway would cut through the annual migration routes of large mammals such as wildebeest and zebras. The road would affect nearly two million animals, including many threatened species such as cheetahs, lions, leopards, wild dogs, elephants and rhinos, the groups say.

"The Serengeti is the site of one of the last great ungulate migrations left on Earth, the pre-eminent symbol of wild nature for millions of visitors and TV viewers, and a hugely important source of income for the people of Tanzania through ecotourism," said James Deutsch of the WCS. "To threaten this natural marvel with a road would be a tragedy.

"We implore the Tanzanian government known around the world for its commitment to conservation to reconsider this proposal and explore other options," Deutsch added.

While the road is scheduled for construction in 2012, there is some confusion over where the government is in the planning process. A spokesman for the Tanzania National Parks, Pascal Shelutete, said the road won't be built until feasibility studies have been done. Reports in the Tanzania media, however, said the feasibility studies have already been completed, according to an Associated Press report.

If the road is built, it could potentially sever access to the Mara River in the north a critical water source for the migrating mammals during the dry season and cause the wildebeest population to collapse. Harming migrations could also drain tourism dollars from nearby national parks, such as Kenya's Masai Mara National Reserve, the country's most important tourism destination.

"A commercial road would not only result in wildlife collisions and human injuries, but would serve to fragment the landscape and undermine the ecosystem in a variety of ways," said Jonathan Baillie, of the ZSL. "To diminish this natural wonder would be a terrible loss for Tanzania and all future generations."

Supporters of the proposed road say it is needed to improve transportation to and from the coast by linking the districts of Serengeti and Loliondo to the national road system.

"We recognize that there is an obvious need for infrastructure development in Tanzania," said Markus Borner, of the Frankfurt Zoological Society, which has worked in the Serengeti since the 1950s. "A far better option than the current proposal is placing a road to the south of the park. Such a road would be both cheaper to construct and would serve a much larger number of people without interrupting the migration and jeopardizing the iconic status of the Serengeti National Park."