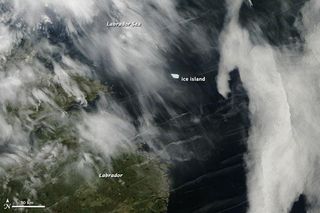 A massive ice island that broke off a glacier in Greenland 11 months ago has been winding its way through Arctic waters ever since. Satellites have now spotted it the coast of Labrador, Canada, as seen in a new image.

The ice island was formed when a 97-square-mile (251-square-kilometer) chunk of ice broke off Greenland's Petermann Glacier on Aug. 5, 2010. It was the largest iceberg to form in the Arctic in 50 years.

Petermann Glacier is one of the two largest remaining glaciers in Greenland that terminate in floating shelves. The glacier connects the great Greenland ice sheet directly with the ocean. When the chunk of ice four times the size of Manhattan broke off, the Petermann Glacier lost about one-quarter of its 43-mile- (70-kilometer-) long floating ice shelf, according to researchers at the University of Delaware.

The Canadian Ice Service has since been tracking the ice island, dubbed PII-A, via satellite and radio beacon.

NASA's Aqua satellite captured an image of the ice chunk in the Labrador Sea on June 25.

The island has been slowly breaking up and melting on its more than 1,800-mile (3,000-km) journey so far. News agencies reported that the ice island now covered roughly 24 square miles (62 square km) in area and weighed between 3.5 and 4 billion tons.

But even with its diminishing size, could eventually pose a hazard to offshore oil platforms and shipping lanes off Newfoundland.

Environment Canada dropped a beacon on PII-A on Sept., 17, 2010, to help track the island.

The website NL Stuff reported on a video shot by Canadian fisherman of the glacier.