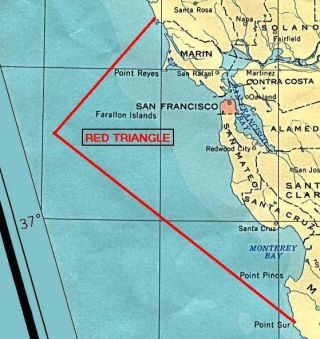 41-year old man will attempt to swim across the shark-infested waters of the Pacific Ocean's Red Triangle, from the California coast near the Golden Gate Bridge to the Farallon Islands.

The man, Joe Locke, who swam the English Channel last year, will attempt the 30-mile (48-kilometer) swim on June 14, Discovery News reports. If he makes it to the Farallon Islands, he'll be the second person to make the solo swim. In 1967, Ted Erikson completed the trek in 14 hours and 38 minutes.

Several relay teams have crossed the Red Triangle, including the first all-female relay team in June, with a time of 16 hours, 30 minutes and 30 seconds.

Great white sharks have killed 65 people in the Red Triangle since 1876, with the last death in 2008.