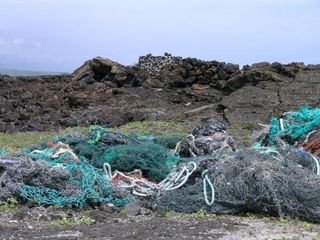 Marine debris on a beach in Hawaii.
(Image: © NOAA.)

A new app lets anyone with an iPhone or Android report trash on beaches and waterways and help scientists too.

With the free Marine Debris Tracker app from the University of Georgia and the National Oceanic and Atmospheric Administration (NOAA), users report the type of debris and its location through GPS features pre-installed on a cell phone.

With plastic bags, cans, abandoned or lost fishing gear and other marine debris washing up on our shores each year, the app could help combat the marine debris problem, according to NOAA. The app tracks where marine debris is accumulating and gives anyone with a "smart phone" an opportunity to be a part of the solution, said the app's developers.

The data reported by users are posted at www.marinedebris.engr.uga.edu for viewing and downloading. The app also encourages users to recycle or properly dispose of the trash they find.

"If you are noticing marine debris, you are also much less likely to litter," said Jenna Jambeck, a University of Georgia engineer and one of the app's developers. "While this app collects data, one of its primary goals is to educate the public about marine debris and its harmful impacts."

Marine debris can kill or injure wildlife when animals ingest it or become entangled in it. The debris can also have an economic impact on the tourism industry and other coastal businesses by affecting the beauty and cleanliness of beaches and waterways.