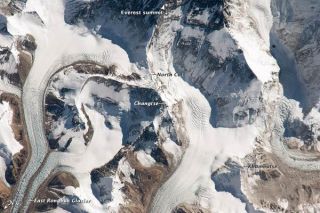 The Nepalese "Super Sherpa" has finished his 21st climb of Mount Everest, extending his record for most trips to the mountain's summit.

The Super Sherpa made his first climb up the path to the summit of Mount Everest in 1990. He dedicated his latest expedition to raising awareness on climate change's impact on the Himalayas. Sherpa is leading the Eco Everest Expedition 2011, which aims to clean up about 4 tons of trash from the mountain.

"If my ascent would promote the cause and help protect the mountain, I am always ready to climb," Sherpa told Agence France-Presse before his flight to the Everest region.

Apa Sherpa is among the 3,000 people including the very young and very old to summit Everest since Edmund Hillary and Tenzing Norgay first scaled the 29,028-foot (8,848-meter) peak in 1953.