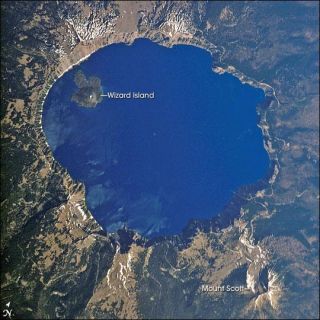 Crater Lake is formed from the caldera of Mount Mazama. Part of the Cascades volcanic chain, Mount Mazama sits between the Three Sisters volcanoes to the north and Mount Shasta to the south.

The catastrophic eruption of Mount Mazama that occurred approximately 7,700 years ago destroyed the volcano while simultaneously forming the basin for Crater Lake. Eruptive activity continued in the region for perhaps a few hundred years after the major eruption.

Evidence of this activity lingers in volcanic rocks, lava flows and domes beneath the lake surface; the small cone of Wizard Island is the only visible portion of these younger rocks. Although considered a dormant volcano, Crater Lake is part of the United States Geological Survey Cascades Volcano Observatory seismic monitoring network, according to a NASA statement.

According to the U.S. Geological Survey, Crater Lake is the deepest lake in the United States, with an average depth of 350 meters (1,148 feet). Water is lost only by evaporation and seepage, and is only replenished by rainwater and snowmelt from the surrounding crater walls. These processes help maintain minimal sediment input into the lake and exceptional water clarity.

The dark blue color of the water shown in this image is typical of Crater Lake; light blue-green areas to the southeast of Wizard Island (along the southern crater rim) probably correspond to particulates perhaps dust either on or just below the water surface.

A light dusting of snow fills the summit cone of Wizard Island. Some of the older lava flows in the area are associated with Mount Scott to the east-southeast of the lake.

The Crater Lake ecosystem is of particular interest to ecologists because of its isolation from the regional landscape, and its overall pristine quality is important to recreational users of Crater Lake National Park. The United States National Park Service maintains programs to monitor changesboth natural and humanto Crater Lake.