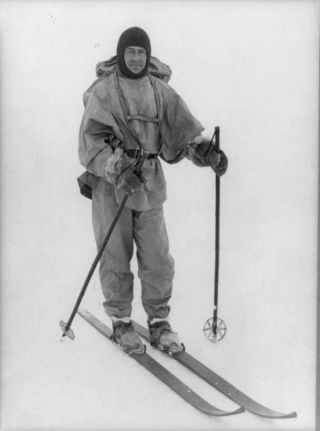 Skis worn by a member of English explorer Captain Robert Falcon Scott's doomed expedition to the South Pole will be auctioned off next month at Christie's in London.

The auction of the skis and other equipment that belonged to Canadian scientist Charles Seymour Wright was reported by Discovery News.

A physicist, glaciologist and navigator, Wright wasn't included in Scott's final push for the Pole , a missed opportunity that probably saved his life.

Scott's team eventually reached the pole on Jan. 17, 1913, only to discover that Norwegian explorer Roald Amundsen beat them to the prize four weeks earlier.

The English team never made it home. They froze to death in their sleeping bags, felled by inferior equipment that proved no match for the extreme conditions on the icy continent .

When Scott didn't return, Wright was among the search party that set off to look for him; it was Wright who first spotted a green tent poking through the snow, an icy grave that contained the stiff bodies of Scott and two other men. Wright also uncovered the dead men's journals, photographic negatives, and other relics, a discovery which revealed the true story of the adventurer's final journey.

On Sept. 22, Wright's sledding kit, skis, scientific instruments, manuscripts, as well as photographs from the expedition will go up for sale, at the behest of Wright's grandson.

"The collection is a poignant souvenir of one of the most famous and tragic journeys in the annals of exploration," Nicholas Lambourn, director of Exploration and Travel at the auction house, told Discovery News.