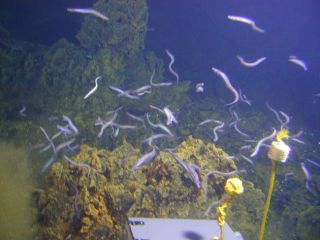 Scientists have discovered an active underwater volcano near the Samoan Island chain. But that's not the most interesting part.

Around the volcano are hundreds and perhaps thousands of eels, slithering through cracks and holes in the hardened lava. Scientists have dubbed the site "Eel City."

Okay, so the volcano is pretty interesting too. It wasn't there four years ago.

Named Nafanua after the ferocious Samoan goddess of war, the volcano now stands nearly 1,000 feet (300 meters) above the surrounding seafloor. It is rising about 8 inches a day.

Eventually, residents in the area may feel its fury.

"To actually have a documented case of an underwater volcano that has emerged within an accurate period of time is very rare -- this is one of those cases," said Hubert Staudigel, a geologist at the Scripps Institution of Oceanography.

The volcano creates a fog of gunk that reduces visibility to less than 10 feet in the vicinity. But from a submersible, scientists were able to document a unique biological community surrounding the newly formed volcanic cone. Much of Nafanua is covered with yellow fluff, collections of microbes that feed off the chemicals emitted by the volcano.

When the submarine landed near this area, scores of eels, each about a foot long, emerged from the rock caves and crevices.

"We were astounded,'' said Craig Young, director of the University of Oregon's Oregon Institute of Marine Biology. "Many of us had worked on hydrothermal vents in other parts of the ocean and had never seen or heard of anything like this before.''

Within decades, continued growth of Nafanua could bring the summit close enough to the sea surface that it could be hazardous to ships. Explosive reactions between red-hot lava and seawater, or tsunamis that may be caused by the collapse of the newly built volcano, could threaten nearby coastal communities.

"It is a good idea for us to keep our eyes on this area, but there is no real reason for concern about immediate danger," Staudigel said.

The Associated Press contributed to this report.