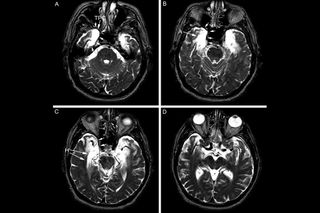 Magnetic resonance images, top-down, of Patient EP’s brain, taken in 1994. The white areas, indicated in frames B and C, show areas of “hyperintensity” in the medial temporal lobe, a region of the brain responsible for memory-formation. Areas of hyperintensity are usually seen in a normal aging brain, but also in some neurological disorders and psychiatric illnesses.
(Image: © Univeristy of California, San Diego School of Medicine)

The brain of a famous patient known only as E.P., whose complete inability to form new memories puzzled researchers for nearly two decades, has now been analyzed.

The brain showed extensive damage to the medial temporal lobe, a brain region known for processing memories, the researchers describe in the April 22 issue of the journal Proceedings of the National Academy of Sciences. Additionally, E.P. showed extensive damage to another region, called the lateral temporal lobe, which probably led to deficits in understanding the meanings of some words, said study co-author Larry Squire, a neuroscientist a the University of California, San Diego and the San Diego VA Medical Center.

The new findings shed light on the way memory is stored in the brain.

For more than 100 years, patients with brain injuries have provided a stunning window into the function of different parts of the brain. For instance, French physician Paul Broca discovered a brain region involved in language after autopsying the brain of a patient known as "Tan," named for the only word he could speak. [Gallery: See Photos of Broca's Brain]

Scientists have also gained insights from the patient Henry Molaison, known as H.M., who was mostly unable to form new memories after epilepsy surgery removed parts of his brain.

Like H.M., the patient known as E.P. had profound amnesia. Squire and his colleagues first met then 72-year-old E.P. in 1994, two years after he was struck with viral encephalitis, or an inflammation of the brain caused by a virus, which damaged his brain. E.P. had even more severe memory loss than H.M., covering about 40 years of his life, and was unable to learn new facts. He also had trouble understanding the meanings of some words.

Squire and his colleagues spent the next 14 years studying E.P.'s memory loss in detail, visiting him at the home he shared with his wife until he passed away in 2006.

Still, in a strange way, E.P.'s subconscious brain became familiar with the researchers and was able to learn new things through habits.

"Whereas, initially, he was skeptical, he eventually regarded us as friends and invited us into the house and went right over to the testing table," Squire said.

E.P. also learned through habit how to get around his house.

When E.P. died, Squire's team performed a detailed autopsy of the patient's brain.

The team found extensive damage to the medial temporal lobe, which is known to play a role in memory formation. But E.P.'s lateral temporal lobe was also damaged, which may explain some of his trouble with word meanings.

The findings are "fantastic," said Suzanne Corkin, a behavioral neuroscientist at the Massachusetts Institute of Technology who is studying H.M.'s brain, and the author of the forthcoming "Permanent Present Tense: The Unforgettable Life of the Amnesic Patient, H.M." (Basic Books, 2013).

Combining insights from both H.M. and E.P.'s brains will allow scientists to strengthen their conclusions about how the brain regions involved in memory formation work, she said.