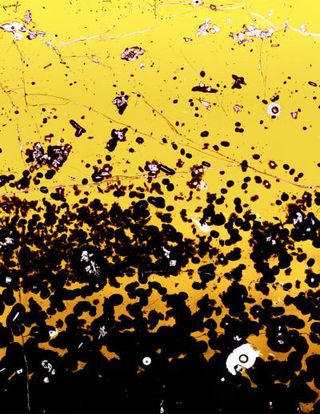 Molten magma erupted onto the seafloor freezes to glass that contains clues to its origin in Earth’s deep mantle.
(Image: © Glenn Macpherson and Tim Gooding)

Most of Earth's carbon clusters deep beneath the surface, in hot mantle rocks that churn below the planet's thin crust.

"Most people probably don't recognize that the vast majority of carbon — the backbone of all life — is located in the deep Earth, below the surface — maybe even 90 percent of it," Elizabeth Cottrell, a geologist at the Smithsonian's Museum of Natural History, said in a statement. Cottrell is lead author of a new study examining how the mantle's carbon cycle changes the chemistry of lava that forms new ocean crust.

At mid-ocean ridges, the gaping fractures that criss-cross Earth's ocean floors, lava oozes out directly from the mantle. Studying this lava gives geoscientists clues to what's going on thousands of miles below the surface.

Cottrell and co-author Katherine Kelley of the University of Rhode Island snared seafloor rocks from around the world, then analyzed their chemistry. Ratios of certain isotopes (atoms of an element with different numbers of neutrons), as well as oxidized iron, suggest carbon reservoirs stored for billions of years strongly influence mantle chemistry, the authors report in the May 2 issue of the journal Science Express.

When the mantle melts and erupts at mid-ocean ridges, it produces a handful of distinct rock chemistries. The reason for the different chemistries could be different sources. For example, the melt could come from ancient, subducted oceanic crust, driven deep into the mantle by plate tectonics, or a deep plume rising from near the core-mantle boundary.

The researchers discovered that one of these handful of rock chemistries, called enriched mantle, tends to carry reduced iron, while another, deemed depleted mantle, matches up with oxidized iron. The pairings make sense, if carbon is playing a role in controlling iron chemistry in the mantle, the researchers said.

"Carbon provides both a mechanism to reduce the iron and also a reasonable explanation for why these reduced lavas are enriched in ways we might expect from melting a carbon-bearing rock," Cottrell said.