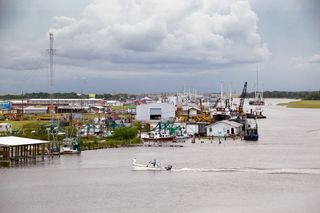 Leeville, La., a coastal community still hurting from the impacts of the 2010 Deepwater Horizon oil spill in the Gulf of Mexico.
(Image: © LSU)

Matthew Lee is a professor of sociology and associate vice chancellor in the Office of Research and Economic Development at LSU and has been closely involved in LSU's research response to the BP Deepwater Horizon drilling disaster. He contributed this article to LiveScience's Expert Voices: Op-Ed & Insights.

It's been three years since the Deepwater Horizon oil rig exploded in the Gulf of Mexico, killing 11 workers and forever changing the way the world views the Gulf Coast. While the $4 billion verdict against BP has finally been handed down as justice for damages, it's not going to help many of the people directly impacted by the spill's impacts. It's time for a reminder of the long-term impacts accompanying technological disasters — and for the development of a better system for addressing the mental well-being of coastal residents and their communities after these all-too-frequent events.

As a sociologist in Louisiana, I've tracked the status of these men, women and families — people who have history in their geography, whose families have worked the same jobs in the same places for generations. These people do hard, back-breaking labor to provide our nation with seafood, oil and gas. They maintain the largest port system in the world, and are exposed to some of the worst hazards imaginable — hurricanes and oil spills, just to scratch the surface.

Through our research, published this week in the journal Social Science Research, my colleagues and I have demonstrated the deep impact the spill had on coastal residents. We conducted the study during the BP spill, several months after the well was capped, and a year after the spill erupted, and we have documented how stressful that event has been on the psyche of the affected citizens.

Not surprisingly, households involved in the fishing industry were particularly impacted, and unlike households employed in other industries, their stress levels actually got worse over the year following the event, not better. We know that a number of factors affected the mental health of this population, but it is safe to say that personal economic status was a top contributor.

There is a significant lesson to be learned here. Policymakers who oversee disaster-relief efforts should be tuned in to the fact that some groups — for example, those that make a living off of natural resources and deal largely in cash-based economies — will have recovery needs that are different from people in other types of settings. "One size fits all" disaster relief packages cannot possibly be efficient or effective in meeting the needs of local communities that have unique cultural and ethnic histories, different community-based resources or specific labor-force configurations. [Disaster Laws: Will Gulf Oil Spill Change Anything?]

Louisiana's coastal population is indeed one of a kind, but it is a major contributor to our national economy. Our state provides the largest fishing haul in the lower 48 states — a catch that nets the United States more than $3 billion annually. As the top producer of domestic oil, we also inject more than $70 billion in energy profits into the economy each year. During these lean financial times, such numbers cannot be ignored.

As the fishing households of coastal Louisiana remind us, technological disasters don't affect all local residents equally, and relief programs — which are supposed to help community residents recover and move forward with their lives — have a responsibility to remain flexible enough in their resource allocation guidelines to be able to assist all those who have been harmed. There needs to be a serious re-evaluation of the way Louisiana's coastal communities — and others who have been impacted by such disasters — are faring. Right now, they need help — help specifically targeted to their needs.

Editor's Note: Geoff Morrell, VP Head of U.S. Communications at BP, contacted LiveScience and conveyed that the company agreed to provide up to $105 million to the Gulf Region Health Outreach Program -- including a $36 million grant to address behavioral and mental health needs in Gulf Coast communities -- as part of the court-approved settlement with the Plaintiffs’ Steering Committee.