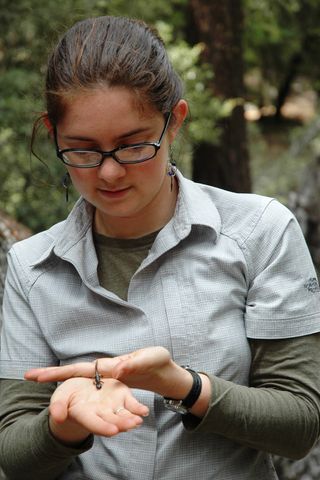 Animals regularly move nutrients between ecosystems. Bats, for example, often forage far from where they roost, and in doing so, they bring nutrients from streams and agricultural areas to their roost. These are known as spatial subsidies, as these nutrients, and in some cases, contaminants move from one ecosystem to another.

The question is, what are the positive and negative effects of spatial subsidies? Julia Earl, a postdoctoral fellow at the National Institute for Mathematical and Biological Synthesis, is investigating this question via mathematics. Earl uses differential equations and builds dynamic mathematical models to make predictions about how subsidies might affect ecosystems over space and time.

Part of Earl's research involves examining frogs and salamanders after metamorphosis, as they move across terrestrial habitats. Juvenile frogs and salamanders move from ponds to surrounding terrestrial landscapes and themselves become nutrient and energy subsidies. The amphibians have a high mortality rate in the juvenile stage, becoming prey or drying out in the water-limiting terrestrial environment. Earl hypothesizes that the salamanders, which don't travel as far as the frogs, will likely affect a relatively small area but have more concentrated effects, while the frogs will affect a larger area and have less concentrated effects.

Earl hopes that her research will determine general patterns of subsidy distribution and help inform conservation and wildlife management efforts.

All my time was spent outside as a kid. Growing up in North Carolina, I spent my summers in the Appalachian Mountains and at the beach. I would go on walks outside and loved seeing interesting plants and animals. As I got older, I learned more about habitat destruction and read books about deformed frogs and declining amphibians. I discovered that I really wanted to help people and the environment coexist.

You can achieve whatever you want as long as you work hard and ask for help when you need it. Though, I would add that it's important to have realistic goals for achieving what you want.

My third grade science fair project was to examine how oil spills affected plants. I had three plants: one got vegetable oil, one motor oil, and the third got water as a control. Strangely, the one that received vegetable oil looked the worst. I guess I was an environmental biologist just waiting to happen!

Thinking creatively. A lot of people think that scientists are very left-brained, but it takes a lot of creativity to design experiments and come up with novel solutions.

Perseverance, which, in my mind, is really a combination of patience and hard work. Scientists have to recognize that mistakes or accidents happen all the time that can ruin days to months (years?) of work. It's important to have backup plans and simply not give up. It definitely pays off eventually.

All of my work relates back to helping people and nature live together. I have done work on the effects of pollution and forestry practices on amphibians, with the goal of figuring out what impacts people are having and if there is a way to minimize these effects on wildlife and ecosystems. I'm currently studying connections between different ecosystems, which have positive effects like supporting ecosystem services (services provided by nature that help people live) and negative effects like transporting contaminants.By working to predict these, I will hopefully be able to make management recommendations to support the positives and prevent or dampen the negatives.

My graduate advisors: Ray Semlitsch at the University of Missouri and Howard Whiteman at Murray State University. They both are very open to new ways of thinking and new approaches to investigating research questions. Also, they both emphasize the need for long-term data and rigorous experimental work, which are complementary approaches. Working with them inspired me to explore new questions and try out novel methods.

That we use so much math. People see ecologists and conservationists on TV outside catching and measuring animals, but they don't see us writing down equations or developing computer programs to help endangered species or predict where contaminants go. Both aspects are actually quite important to solving problems effectively.

My laptop or my purse.

Alternative/Indie rock. What can I say? I grew up in the 90s.

Editor's Note: The researchers depicted in ScienceLives articles have been supported by the National Science Foundation,the federal agency charged with funding basic research and education across all fields of science and engineering. Any opinions, findings, and conclusions or recommendations expressed in this material are those of the author and do not necessarily reflect the views of the National Science Foundation. See the ScienceLives archive.