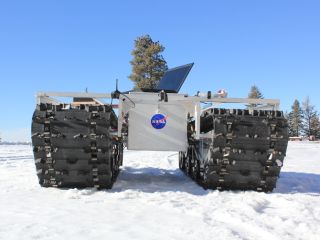 A prototype of GROVER, minus its solar panels, was tested in January 2012 at a ski resort in Idaho. The laptop in the picture is for testing purposes only and not part of the final product.
(Image: © Gabriel Trisca, Boise State University)

NASA's newest rover won't be exploring another planet, but will take a look at part of our own. Named Grover (short for Goddard Remotely Operated Vehicle for Exploration and Research), the rover will explore Greenland's ice sheets to better understand how they form, and how quickly they may be melting.

The device is solar-powered and semi-autonomous, and will embark on its first mission beginning tomorrow (May 3), and continuing until June 8. It was developed from 2010-2011 by teams of students in summer engineering boot camps at Goddard Space Flight Center in Maryland, according to a release from NASA.

The 6-foot-tall, 800-pound rover is equipped with ground-penetrating radar that will send "radio wave pulses into the ice sheet, and the waves bounce off buried features, informing researchers about the characteristics of the snow and ice layers," according to the NASA statement. [Video: Grover the Rover to Explore Greenland Ice Sheet]

At first Grover will operate near the National Science Foundation's Summit Camp, located at the apex of Greenland's ice sheet. Once it appears the rover is functioning properly, it will roam more widely and be controlled via satellite. Since the Arctic sun shines 24 hours a day during the summer, the solar-powered rover will be able to operate continuously, NASA said.

"We think it's really powerful," Gabriel Trisca, a Boise State master's degree student who developed Grover's software, said in the NASA statement. "The fact is the robot could be anywhere in the world and we'll be able to control it from anywhere."

Grover should shed light on Greenland's snow accumulation. Researchers can compare annual accumulation to the amount of ice lost to the sea each year to find out how much mass is being lost to melting, and how much Greenland's ice is contributing to sea level rise.

Greenland's ice sheets contain a vast store of freshwater that could affect global sea levels, and more and more ice is melting. In fact, Greenland's ice loss is accelerating by about 22 gigatons (22 cubic kilometers) of ice each year, according to a 2012 study.