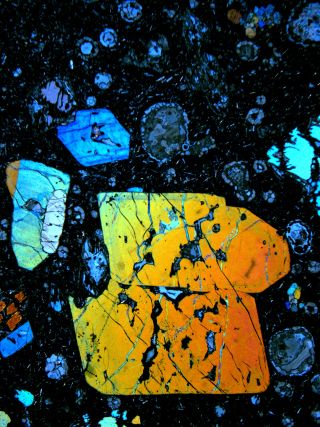 An cross-polarized light image of the lava sample from Mangaia island, showing sulfide grains in the rock at 1.5 times magnification.
(Image: © J.M.D. Day)

The remains of a real-life journey to the center of the Earth are preserved in a South Pacific volcano, a new study suggests.

The lava that erupted from the Cook Islands volcano, called Mangaia, contains a few tiny grains of sulfide, a mineral, with a peculiar ratio of sulfur isotopes, according to research published in today's (April 24) issue of the journal Nature. The unusual ratio could only have formed before oxygen-breathing life appeared on Earth 2.45 billion years ago. Isotopes are versions of elements with different numbers of neutrons, giving them differing weights.

The study researchers think the sulfide formed at Earth's surface ages ago in ancient oceanic crust, and then sank deep into Earth's mantle, likely all the way to the core-mantle boundary, 1,865 miles (3,000 kilometers) below the surface. Some billions of years later, a plume of hot material rising from above the core ferried the sulfide skyward, until it escaped through Mangaia about 20 million years ago.

"We have identified material that was actually at the surface 2.45 billion years ago," said Rita Cabral, lead study author and a geochemistry graduate student at Boston University. [Infographic: Tallest Mountain to Deepest Ocean Trench]

The findings are direct evidence that oceanic crust was recycled in the mantle, Cabral said. Scientists are pretty confident that over millions of years, giant convection cells churned the stiff rock inside the mantle, the layer between Earth's thin crust and iron core. Convection could also recycle crust that disappears into the mantle via subduction zones, the plate boundaries where one tectonic plate dives underneath another. Images derived from seismic waves, which change speed when passing through cold or hot materials, have revealed possible oceanic crust piled near the core.

"The fact we have a time constraint is great for figuring out exactly how vigorous convection is in the mantle, and how extensive it is, " Cabral told OurAmazingPlanet. "It's very exciting, and I'm looking forward to seeing what models come out of it. If there are areas where this material can sit around for a couple billion years, that's something really important."

The sulfur isotopes pin a minimum age on the source of Mangaia's lava, so the lava could be even older than 2.45 billion years. Before that time, there was no protective ozone layer on Earth, because there was little oxygen in the atmosphere. Ultraviolet radiation from the sun strongly influenced sulfur chemistry in the atmosphere, leaving a distinctive chemical signature in the rocks. When oxygen-breathing life appeared, sulfur chemistry shifted dramatically.

"I think this is another really strong piece of evidence that material from the surface of the Earth gets subducted and transported to the mantle and ultimately returns in these mantle plumes," said William White, a geochemist at Cornell University who wasn't involved in the study. "My suspicion is that this has been tucked away at the base of the mantle for 2.5 billion years or so."

Mangaia is part of a chain of volcanic islands that rose from the sea over a hotspot, or plume of material rising from the mantle — similar to Hawaii's volcanoes.

"Stuff from the very deepest mantle is forming these ocean island volcanoes, and I think the real takeaway is the fact that there's an intimate connection between surface material and the deep mantle," White said. "Some of the things down there were once at the surface of the Earth."

Cabral explained that volcanic islands each have unique chemical signatures — think of them as having flavors. Scientists are still sorting out the reasons for the different flavors. Some islands may come from subducted oceanic crust, while others could be sediments, or even fragments of continents. But there are odd geochemical signals, such as the sulfur isotopes Cabral and her co-authors found, that hint at

stranger stuff going on in the mantle.

"Some of the chemistry in these mantle-derived lavas — some of the things we don't understand — might reflect some of the surface history of the Earth," White told OurAmazingPlanet.

The findings help confirm that the mantle can store very old crust for billions of years. In this case, it gave geochemists a window into Earth's early history. Other odd rock chemistry has led scientists to conclude that there may be even older rocks in the mantle, from before 4 billion years ago, said Steve Shirey, a geochemist at the Carnegie Institute for Science in Washington, D.C., who was not involved in the study. (The Earth is 4.54 billion years old.)

"We don't know how we go from what we see on the ocean floor to what we see at the depths,” Shirey said. “At this stage, a lot of things are possible.”