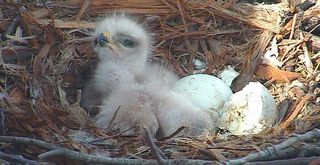 If you're lucky, or very patient, you might be able to catch a live hawk hatching this Earth Day.

Cornell University's Ornithology Lab has a camera pointed at a nest that's perched on a light pole high above an athletic field at the Ithaca, N.Y., campus where a female red-tailed hawk named Big Red and her mate Ezra are waiting for one last egg to hatch. The hatching started this morning, and two of the chicks had broken out of their shells by the afternoon. On the lab's livestream, I caught the two baby birds wrestling in their nest while their parents were switching incubation duties.

"Earth Day comes once a year to remind us of the natural world around us," Charles Eldermire, who runs the lab's Bird Cam project, said in a statement this afternoon. "What better way to celebrate than to see new life beginning?"