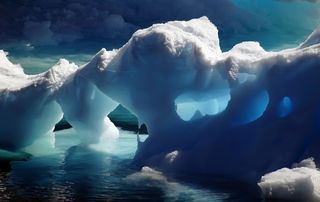 Summer ice melt has increased tenfold over the last millennium in the Antarctic Peninsula, with most of the melt occurring during the last several decades in conjunction with global warming, new research suggests.

Rapid melt can destabilize glaciers and ice shelves (the tongues of glaciers that float on the ocean), suggesting that there could be some dramatic collapses and a resulting increase in sea levels if the melting continues.

"What that means is that the Antarctic Peninsula has warmed to a level where even small increases in temperature can now lead to a big increase in summer ice melt," study co-author Nerilie Abram, a researcher at the Australian National University and the British Antarctic Survey, said in a statement.

The ice melt in the Antarctic Peninsula, located in the northeastern part of the continent, is almost certainly caused by human-induced climate change, said study co-author Eric Steig, an Earth and space sciences professor at the University of Washington. The peninsula is one of the fastest-warming places on the planet, and other recent research has shown that the melt season there is longer than it used to be.

To study the historic Antarctic climate, the study team drilled a 1,194-foot-long (364 meters) ice core from James Ross Island, near the northeastern tip of Antarctica.

The core provided insight into historic temperatures in Antarctica, and contained visible layers where summer snow melted and then refroze. The thickness of these layers revealed the extent of melt in the region over the past 1,000 years.

That summer melt is now at the highest levels seen over the past millennium. And while the temperature increased gradually for the first several hundred years, snowmelt dramatically increased in the latter half of the 20th century, Abram said in the statement.

The findings, detailed in the April 14 issue of the journal Nature Geoscience, suggest that the Antarctic Peninsula may now be particularly vulnerable to climate change.

The picture from an ice core drilled in West Antarctica is less clear. Similar large temperature spikes have been seen in the past there, but the picture is more complex and the exact causes are harder to tease out. It is possible that increased snowmelt there may be due to the El Niño weather pattern in the 1990s, the study authors said.